Payday 2 is the sequel, of course, to the original game of the series titled Payday. The goal/motive of the game is to enter jobs and missions, online or offline, to earn a payday towards unlocking new abilities and items for your arsenal. 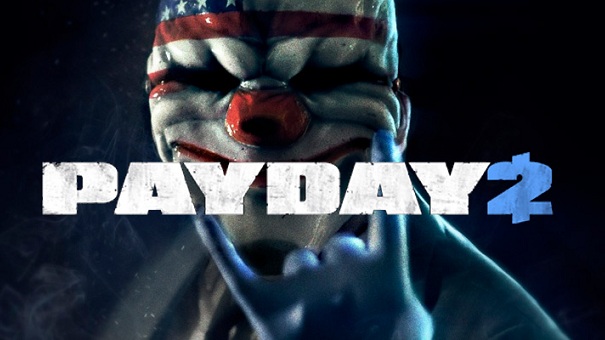 I usually make an effort to review games I enjoy because I find it too hard to force myself through a terrible game so I can give its entirety a fair opinion. That being said I had hopes that Payday 2 would be a thoroughly invigorating experience for me but unfortunately it is quite a disappointment to me.

What’s been said so far about the game from other sources is that it builds on a lot that was existent in the first title and adds a lot more features that give it potential. Unfortunately potential doesn’t go very far if only the minor features provide a sense of progression for the series.

The main focus of the game needs to show improvement or it’s just going to feel like an incomplete thought.

The most premiere impression I got of Payday 2 is that it’s a paid first person shooter that uses a free-to-play model of economy and progression. It feels incredibly sluggish and every unlock from abilities to weapons and their accessories come at you incredibly slow. What you spend your money on has less to do with the player’s favored path and more to do with whatever you happen to unlock after a mission. Your abilities unlock in tiers that you can choose from but you need to spend both ability points, from leveling up, and money from jobs to earn them. Your money is used on practically everything in the game, actually, so it becomes far too integral to your progression. The game uses it to the point where all you’re really doing is farming jobs and missions for cash to improve just bit by bit. 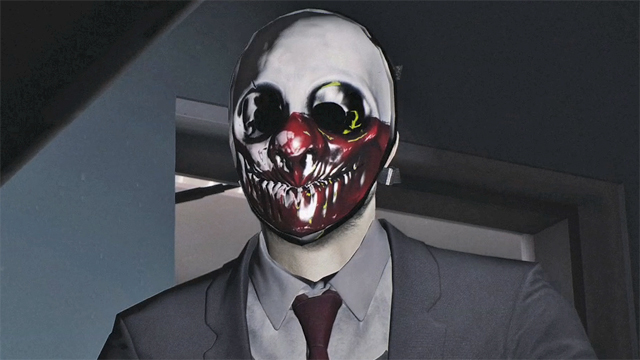 Speaking of the jobs, they’re pretty varied in their objectives but they don’t ever make me feel smart or like I’m improving. Every single mission, regardless of the actual objective, just ends with players grabbing bags of goods from one place and shooting cops so they can make their way to a second location. The difficulty ramps predictably and just feels like the designers decided to challenge me with quantity over quality when they created the encounters. A single cop will never give me grief but it’s when the mission’s been going for 20 minutes and I have 50 SWAT officers outside the building that I feel threatened. I understand that the objective is to give the player the feeling that they’re in a ‘Heat’ type of situation with guns blazing outside of a bank but they seem to forget that there was more to the movie than just a gunfight.

The designers also appear unaware that in every heist movie with a gunfight at it’s climax there’s a whole buildup to that point that’s longer than spending two minutes walking around a building to ‘case the joint.’ 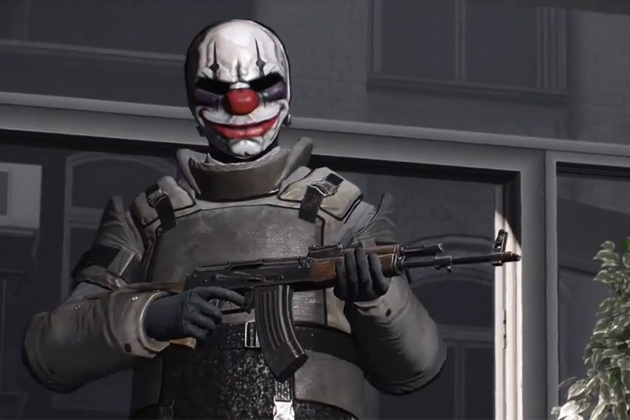 The progression lacks direction and feels pretty sluggish. The game should be free and just offer to unlock all the weapons for me if I pay thirty dollars because it already has the foundation built. It genuinely seems like the game was made to add in another currency that acts paramount and just unlocks everything for me immediately, for the right real-money price

The most frustrating thing about the game’s progression is that not only do I have to save up a f***-ton of money to get a weapon I also need to hope to randomly unlock it after a mission.  Every weapon and accessory for them that I’ve unlocked has been earned through post-mission card draws, which are seemingly random and don’t exactly help me feel like I’m playing the game by my own hand. I can’t walk into a mission with the weapon I want because I need to play at least another forty missions to unlock it. Even if I save my money from jobs there’s no guarantee I’ll have the unlocks I want to spend it on either.

Masks are especially a massive let down as you have to unlock multiple components just for the opportunity to get a single one. Every component has a single use, is difficult to find and you can’t predict which ones you’ll earn. If you have a single component you want you really need to hold onto it because you wouldn’t want to use it up and possibly never find it again.

As for the game’s actual in-game mechanics they’re essentially the only things about the game that actually work well. The shooting is smooth and easy and everything you should be able to do in a heist is pretty much possible, as long as you are alright with the cops showing up in five minutes. That being said there are still some bits of the in-game mechanics that are missing or are still poorly executed. There are a few buttons that are overly used, one in particular is used to interact with everything in the level but if the level’s cluttered it can be pretty difficult to grab jewellery when it keeps triggering your character to yell at a hostage. 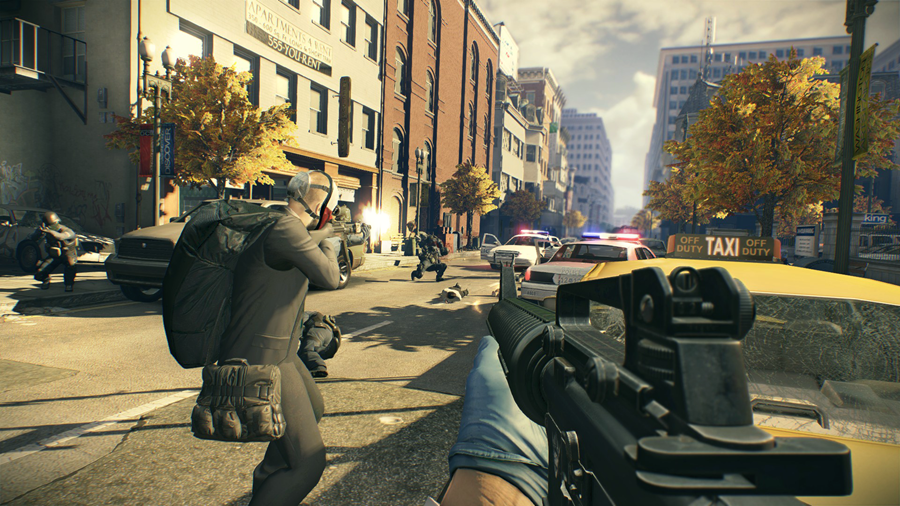 The game also misses out on any sort of weapon pick up mechanics. If weapons were unlocked for purchase by finding them int eh game I’d have far more motivation to do jobs for weapons than just hoping that the weapon I want is on the card I pick after the mission itself. Unfortunately though this isn’t the case and you, as the player, can only ever pick up ammo for your own weapons. There’s no motivation to kill an opponent other than just to clear the way for your objective which feels incredibly pointless and empty as a player.

The game is still enjoyable though if only because a completely co-operative shooter will always remain a rarity. Playing a first-person shooter in a non-competitive way is something that a lot of people in the industry don’t consider financially viable because there’s no way to naturally bring players back to the game. If you’re not feeling the rush of competition then there’s no motivation to play a game as broad scoped as most first person shooters are. The problem with this philosophy is that not only competition can be used as a motivator, and what’s promising to me about the Payday series is that they seem welcome to the challenge of proving it wrong.

Unfortunately Payday 2 doesn’t actually do this, and it ends up feeling like an empty game regardless of how it has you interact with other players online.

The game feels like it was made by two different companies, or at least two different designers, who had no idea that one was making a shooter and the other was makinga  free-to-play game on Facebook. I would suggest checking the game out at a later date if they completely revamp the game’s economy and progression, and even then I would suggest waiting until the Christmas sale to do so.

It feels like a poorly thought out experience on both ends and even the best parts don’t present anything fresh. 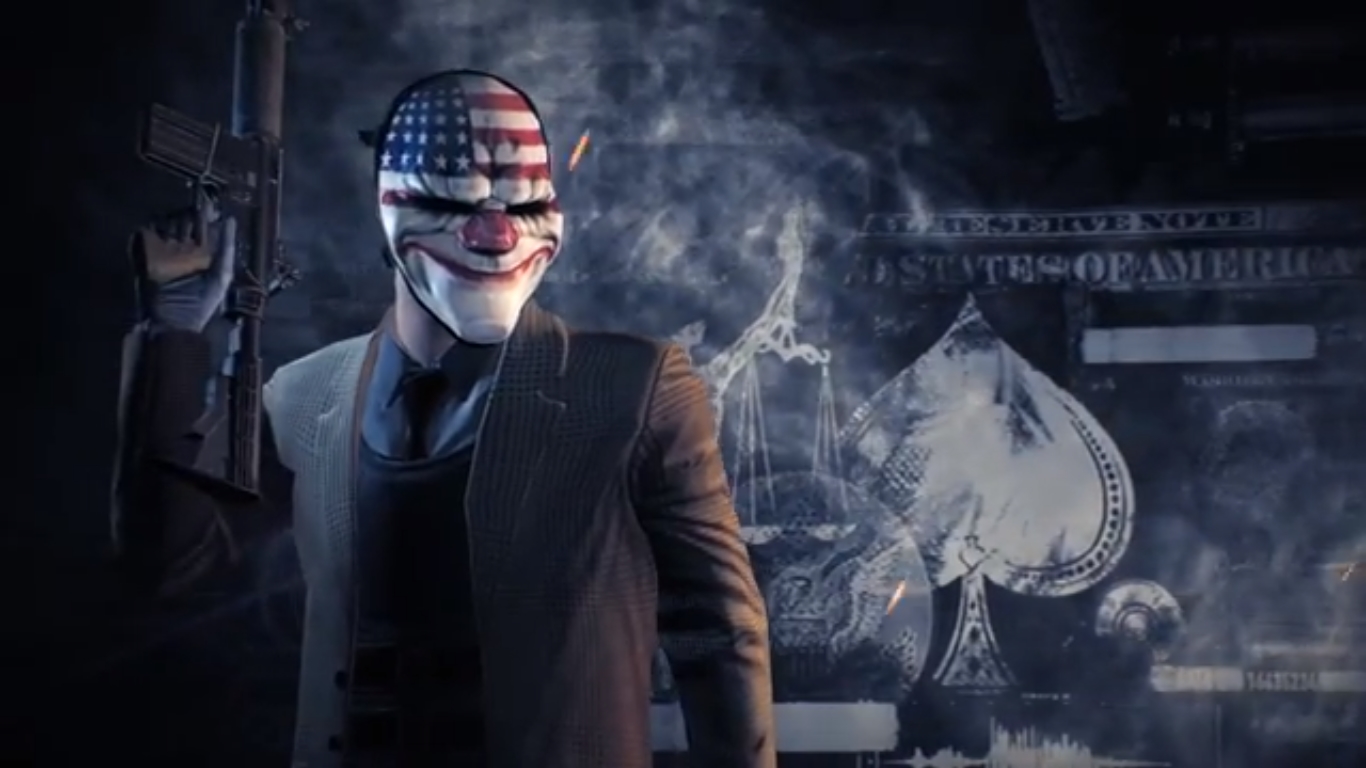 This game was reviewed on PC via Steam.

Snowfall is here and it is time to cheer! Sorry about that… As different video games pump out their holiday events, plenty get swept under the radar. If you are tired from playing the multiple FPS holiday events … END_OF_DOCUMENT_TOKEN_TO_BE_REPLACED

Welcome ghouls, beasts, tricksters, and every horrific being known to man. The spooky season is upon us and I figured I would indulge in the festivities in my own way. Thus, I have come up with a satirical take on … END_OF_DOCUMENT_TOKEN_TO_BE_REPLACED

Do so, and you’ll probably find that T END_OF_DOCUMENT_TOKEN_TO_BE_REPLACED

I remember when I played my first Resident Evil. It was a gift and couldn’t wait to get it running in my old PS1. That old Capcom “this game contains scenes of explicit violence and gore” plastered on the … END_OF_DOCUMENT_TOKEN_TO_BE_REPLACED

At the beginning of one mission, you are marked for dead by the organization you work for. Your handler has no idea what happened but informs you that they are coming for … END_OF_DOCUMENT_TOKEN_TO_BE_REPLACED

The history of gaming isn’t that old compared to other artistic and entertainment mediums. Many people have lived through the entirety of video game history, and more people have seen most of it. As such, you’d think that the … END_OF_DOCUMENT_TOKEN_TO_BE_REPLACED

(Updated 4/18/22) Even at a time when it feels like every game is being adapted into a show or movie, the news that Twisted Metal is being turned into a TV series stands out. Why? Well, it probably has … END_OF_DOCUMENT_TOKEN_TO_BE_REPLACED

(Updated 4/15/22) The reveal of the Mortal Kombat movie trailer and news that Street Fighter characters are joining the Fortnite roster has both legendary franchises on the minds of gamers everywhere. So, it’s only natural that fans have also … END_OF_DOCUMENT_TOKEN_TO_BE_REPLACED

While Super Smash Brothers for the Wii U and 3DS has been out for just over a year and the recent announcement of Cloud joining the roster garnering a massive amount of hype, many fans of the fighting game … END_OF_DOCUMENT_TOKEN_TO_BE_REPLACED

I’ll admit that I’ve never been a fan of visual novels. I have nothing against them; it just isn’t a genre I’m interested in. That said, MangaGamer’s announcement a while back that their upcoming Steam release of Kindred Spirits … END_OF_DOCUMENT_TOKEN_TO_BE_REPLACED

Black Shell Media is a multimedia marketing and PR studio specializing in distribution and publishing of indie games! We do a lot of marketing and work with websites, … END_OF_DOCUMENT_TOKEN_TO_BE_REPLACED

Snowfall is here and it is time to cheer! Sorry about that… As different video games pump out their holiday events, plenty get swept under the radar. If you are tired from playing the multiple FPS holiday events … END_OF_DOCUMENT_TOKEN_TO_BE_REPLACED

Amazon Prime members can get free games and free in-game content every month that last a certain amount of time. You can jump over to Amazon to sign-up for an account or navigate to the Prime Gaming section to see … END_OF_DOCUMENT_TOKEN_TO_BE_REPLACED