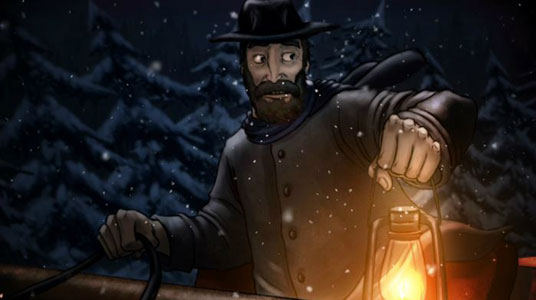 Every now and then you play a game that throws you for a complete loop. It openly invites high expectations with a unique concept and fascinating story setting, only to find that their proverbial traps don’t spring quite as intended, with many aspects of its release marred by the look and feel of an incomplete product that, while certainly having many strong merits in its own right, leaves us feeling the need for, wait for it, less.  Half-good and half-terrible, it creates a tug-of-war in the player that keeps them from truly loving it as they wanted. So it goes with Sang-Froid: Tales of Werewolves (Tome I), the strategy action RPG with a liberal dose of tower defense from Artifice Studio. The story finds the player as one of two burly Canadian brothers, Jack or Joseph O’Carroll, who must put aside their raging differences to save the soul of their beloved sister Josephine from lupine enemies and demonic threats using sharp axes, ingenious traps, and steady aim. Strange things are occurring in the forests, and it is clear from the opening cinematic that the devil himself is to blame.

It is night, and a horse-drawn sleigh gallops through a wintry forest at an urgent pace, its rider bearing the orange glow of a lantern and the words of the Lord’s Prayer on his lips. He whips his head in the direction of a wolf’s frightening howl, unaware of the fallen tree that blocks his path. Thrown from the sleigh, he makes one final attempt to get to the cabin in the distance only to be cut down by an invisible menace. And so begins the story of werewolves haunting the town of Wolvesvale, and a taste of the enemy to come.

The enemy turns out to be plenty menacing once the game gets going; you begin with three tutorials that show you the basics of battling nocturnal threats, which present you with less threatening scenarios to get you familiarized with what is ahead. The game does, however, continue to give you more ongoing video tutorials to let you in on what your brand new weapons and abilities can do. This proves to be very helpful when the enemy waves start to include more powerful enemies. Wolves and Werewolves attack in tandem and both have a more powerful “Grand” version that packs an even bigger wallop. Facing these enemies down with axe and gun is no easy feat. 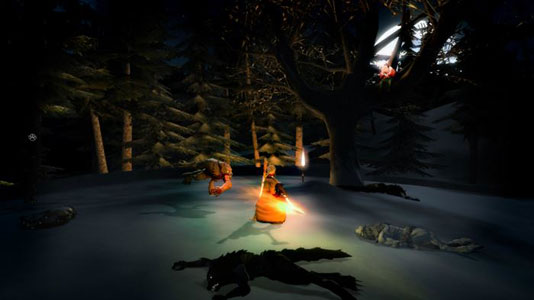 And this is where the traps come in. You begin each day on a 3D map of your defensive territory that shows you where the creatures are going to attack, which are indicated by a red dot and ‘X’ showing what direction they will head to their targets, i.e. the occupants of significant buildings in your territory, and clicking on a red marker will show you the route they will take to get to these places. You have a limited pool of Action Points. When you place a trap, the cost of the trap is deducted from these points, and certain traps cost actual money to place, such as the Wolf Trap or Spike Trap. These elements are essential in helping you set up your defenses, which you use to slow down, reroute, or outright kill an enemy before they get to you. This system works very well and provides a suitable challenge that is complimented by a melee segment which allows you to finish them off with much satisfaction.

This is repeated over twenty days of attacks, each day bringing a new threat or combination of creatures that require more and more strategy on the part of the player, which differs slightly between the brothers. If you chose Joseph, you get a bigger pool of Action Points and stronger melee power. If Jack, you get fewer AP and less melee strength, forcing the player to be much more strategic in placing traps.  As you progress you get new toys that give you a slight edge on the enemy. Some of the more useful traps are the basic Wolf Trap, Hanging Net, and my favorite, Bait. Baiting an enemy stops them in their tracks, perfect for placing under a hanging net trap or for slowing them down as you fend off other attackers. One of the best contraptions you get to use later in the game is the Watchtower Zip Line. You erect two towers that act as a fast transportation system between two points, allowing you to traverse the forest setting quickly.

But the forest isn’t the only setting featured in the game. Two areas open up to you for trade in between nights: Wolvesvale, the starting town where you can buy guns, axes, ammo, and other power ups to help you through the night. The other is the Innu village whose tribal members aid you in your fight against a tribe of shapeshifters called the Maikans. These areas are one of the rare parts of the game where you get sucked into the time period with its historical and rustic look. The town is rendered in 3D, but has a beautiful hand-drawn appearance that captures the folktale atmosphere of 1858 Lower Canada. This illustrative style carries over into all of the game menus giving you that woodsy feel that is perfect for the sound of eerie howls through the snow-covered trees. 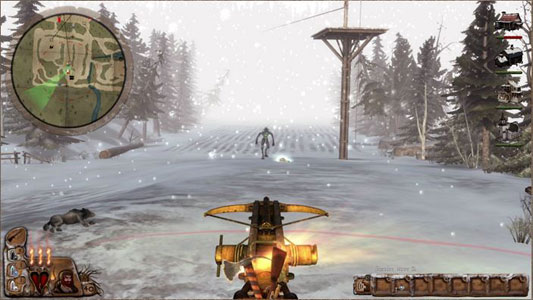 And the game just sounds great on top of everything else. The Celtic folk music that plays at different points in the game grabs you and doesn’t let go. Indeed, you will have these tunes stuck in your head for several days. The best of these is the tune you hear during the rather long loading screen, but I almost like that it is long because I get to listen to an excellent rendition of real folk instrumentals. I love it when the music kicks in during a heated battle with accordion and rhythmic tapping going crazy making you feel like a wild Irish hero. Though some may feel it contrasts the dark nature of the game too much, it serves to keep things from feeling bleak and depressing, keeping everything upbeat and hopeful that victory will be achieved at the end of the story.

Yet it’s the story that is something to behold. Not because it is good, but because of how awfully executed it is. The idea is fantastic and does keep you wondering what’s going to happen next, but most of the intrigue is destroyed by shoddy presentation. One wonders how much input Amos Daragon author Bryan Perro actually had in the writing of the game, as it bears little resemblance to something one would expect from a published author. The 3D cut scenes break visual continuity with the rest of the game, and present us with a disjointed story that feels more like an after-thought than serious effort. We are treated here and there to more of the awesome hand-drawn cinematics, a look they should have stayed with throughout, but they are too few and far between. Finishing that off with below sub-par voice acting and unconvincing (though often still likeable) characters, we are left with a broken piece of the game that, if finished, would have put it over the moon. Pun intended.

But that is the extent of the bad, and I will ponder it no more. The rest of the game is so fun and addicting that one can look past such a glaring flaw and find a satisfying purchase for this first part of the series. I look forward to the next entry in the series, hoping with cautious optimism that the team at Artifice Studios can improve on and add to the fresh and fun gameplay they’ve introduced to us here. Part tower defense, part hack and slash, and part RPG, Sang-Froid: Tales of Werewolves is a game that is not to be missed by indie lovers and mainstream gamers alike. I can’t wait to grab the axe and flintlock for some more lycan-bashing exploits. 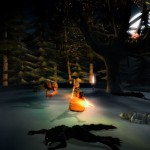 Trifle not with an angry lumberjack. 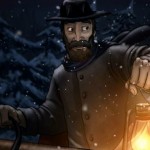 Our Father, who art in heaven… 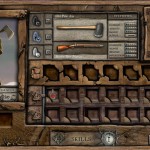 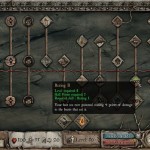 Upgrades give you an excellent edge. 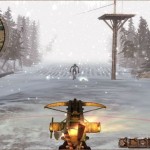 Darksiders 2 Review
Kingdoms of Amalur: Reckoning Review
Everything is an RPG

Snowfall is here and it is time to cheer! Sorry about that… As different video games pump out their holiday events, plenty get swept under the radar. If you are tired from playing the multiple FPS holiday events … END_OF_DOCUMENT_TOKEN_TO_BE_REPLACED

Welcome ghouls, beasts, tricksters, and every horrific being known to man. The spooky season is upon us and I figured I would indulge in the festivities in my own way. Thus, I have come up with a satirical take on … END_OF_DOCUMENT_TOKEN_TO_BE_REPLACED

Do so, and you’ll probably find that T END_OF_DOCUMENT_TOKEN_TO_BE_REPLACED

I remember when I played my first Resident Evil. It was a gift and couldn’t wait to get it running in my old PS1. That old Capcom “this game contains scenes of explicit violence and gore” plastered on the … END_OF_DOCUMENT_TOKEN_TO_BE_REPLACED

At the beginning of one mission, you are marked for dead by the organization you work for. Your handler has no idea what happened but informs you that they are coming for … END_OF_DOCUMENT_TOKEN_TO_BE_REPLACED

The history of gaming isn’t that old compared to other artistic and entertainment mediums. Many people have lived through the entirety of video game history, and more people have seen most of it. As such, you’d think that the … END_OF_DOCUMENT_TOKEN_TO_BE_REPLACED

(Updated 4/18/22) Even at a time when it feels like every game is being adapted into a show or movie, the news that Twisted Metal is being turned into a TV series stands out. Why? Well, it probably has … END_OF_DOCUMENT_TOKEN_TO_BE_REPLACED

(Updated 4/15/22) The reveal of the Mortal Kombat movie trailer and news that Street Fighter characters are joining the Fortnite roster has both legendary franchises on the minds of gamers everywhere. So, it’s only natural that fans have also … END_OF_DOCUMENT_TOKEN_TO_BE_REPLACED

While Super Smash Brothers for the Wii U and 3DS has been out for just over a year and the recent announcement of Cloud joining the roster garnering a massive amount of hype, many fans of the fighting game … END_OF_DOCUMENT_TOKEN_TO_BE_REPLACED

I’ll admit that I’ve never been a fan of visual novels. I have nothing against them; it just isn’t a genre I’m interested in. That said, MangaGamer’s announcement a while back that their upcoming Steam release of Kindred Spirits … END_OF_DOCUMENT_TOKEN_TO_BE_REPLACED

Black Shell Media is a multimedia marketing and PR studio specializing in distribution and publishing of indie games! We do a lot of marketing and work with websites, … END_OF_DOCUMENT_TOKEN_TO_BE_REPLACED

Snowfall is here and it is time to cheer! Sorry about that… As different video games pump out their holiday events, plenty get swept under the radar. If you are tired from playing the multiple FPS holiday events … END_OF_DOCUMENT_TOKEN_TO_BE_REPLACED

Amazon Prime members can get free games and free in-game content every month that last a certain amount of time. You can jump over to Amazon to sign-up for an account or navigate to the Prime Gaming section to see … END_OF_DOCUMENT_TOKEN_TO_BE_REPLACED