By the time you’ve read this I’ve most likely re-written it half a dozen times.

I’m not usually a perfectionist but as someone who’s played a game as fantastic as Towerfall I feel it’s only right to do it justice and put more than a modicum amount of my time into helping you understand what makes this game so damn fun. 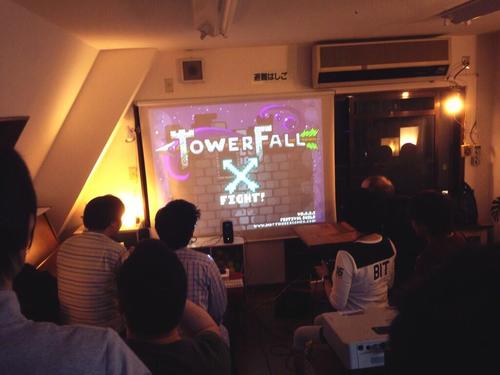 Matt Thorson is an indie developer here in beautiful British Columbia, Canada who’s been behind some fantastic games for Adult Swim and was also the creator of the Ogmo Editor for Flash development. If you’re familiar with game development in Flash you should probably know what it is.

Matt’s been making indie games for a pretty long time and I remember getting addicted to Give Up, Robot 2 when I was studying in school a few years ago. It got to the point where, in a Flash development class, I got in trouble for playing it too much. I didn’t know however this until after the class because I was too busy with the game to hear the teacher.

Matt also takes part in a large number of game jams which are usually 1-3 day sprints of game development. You lock yourself in somewhere and give yourself an incredibly short deadline to make a playable game either by yourself or with others.

It was at one of these jams that Matt created the first build of Towerfall. 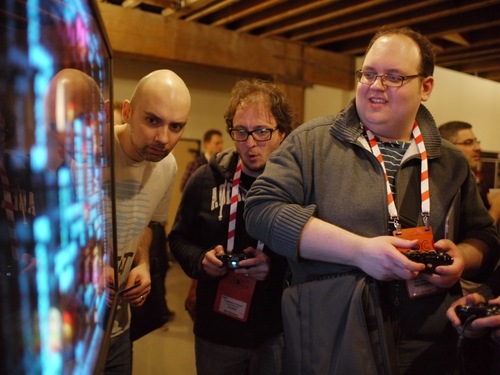 I got my hands on the game at a house party some time later that Matt and his roommates had at what they’ve righteously dubbed “the indie house” of Vancouver. He’s shown it off at indie meetups and GDC since then and it’s been making great impressions all around.

When I walked into the basement to see people cheering and shouting at a screen it instantly took my attention away from whatever it is I was doing at the time. I think I was talking to a woman. The game was fast paced and insane so of course I needed to get my hands on it, no matter how daunting it seemed.

It struck me instantly that the game made me feel really damn good. It felt good on the inside but more than that it felt like this was a game I was earning some degree of skill in. After dying multiple times and winning a single round of five however I realized that I wasn’t that great. When I saw Matt and some others take up the four controllers and play I felt even worse at the game. This speaks volumes about the impact the game had on me.

Towerfall is a game about mastery and precision which is why it can dub itself an “archery combat” game. It’s so fast but incredibly simple and easy to pick up. The more you learn the better you feel but at no point will you feel bad about your skill level. The game is just too damn fun for you to ever be upset with it, like an adorable puppy that can use a bow and arrow. 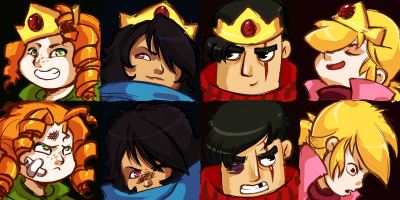 The game boasts some great audio and art that brings the gameplay to life. Matt’s original art was very functional and had some charm to it. After being set up with a husband-wife pair down south, in the States, however the game’s really come into it’s own. The art compliments the gameplay and the effects it has on those playing it.

Every character plays the same but their appearances set them apart from each other and you might find yourself getting attached to them.

You kill other players in two ways: shooting them with arrows or jumping on their heads. When I played the game it was at a very, VERY early state and the most complicated pieces of the game were ladders/ropes to cling to and disappearing blocks.

I think there were shields and laser-arrows as well (they ricochet off walls) but they simply augmented the combat while the ladders and ghost-blocks were actually changing how I played the game. The most unique element of the game that I noticed however were bubbles of poison that broke apart and killed anyone below if you jumped on them.

Add in the looping pacman-esque edges of the levels then a unique scoring system and you have yourself a lively gaming experience..

When the game is finished there’s a quick replay as well that shows the final kill of the match. This lets you brag a little but it gives your stalwart enemies an idea of how you pulled it off.

Towerfall was a blast when I played it but the game didn’t have the bomb-arrows and new art-design behind it. The game’s amount of levels and match-options help keep the gameplay interesting and always fresh.

What’s so great about Towerfall’s story is that Matt’s never lost his vision of the game and it’s always stayed fun. Matt created it for a jam and it was when he realized how much fun people were having with it he just ran through development. He added solid features that augment the cerebral gameplay allowing the core of the game to stay static. It’s something a lot of developers in the AAA industry can’t afford to do when they have a million dollars in profit riding on their next project.

He’s said in an interview (watch here) that he continued to make it because of how much fun he had creating the game and iterating on it’s elements. As someone who may purchase an Ouya (or at least steal a friend’s) just for this game, I thank you Matt.

I’m expecting the game to make a huge impact when it’s coming out on June 25th, the same day the Ouya is now slated to release. I’m really looking forward to this title and you should definitely mark the 25th down on your calendar.

Catch other previews here where Ben Kuchera calls Towerfall the Ouya’s “killer app” and here where it makes Patrick Hancock want an Ouya.

All images are sourced from the Towerfall Tumblr.

In 2020 it was revealed developer IO Interactive was working on a James Bond game known as Project 007 which, understandably, shook the video game world. Still in production, there’s a possibility that their James Bond game could be the … END_OF_DOCUMENT_TOKEN_TO_BE_REPLACED

The history of gaming isn’t that old compared to other artistic and entertainment mediums. Many people have lived through the entirety of video game history, and more people have seen most of it. As such, you’d think that the … END_OF_DOCUMENT_TOKEN_TO_BE_REPLACED

30+ years on, there’s somehow nothing quite like an NES action game. From the soundtracks to the level design and airtight mechanics, classic NES games like Ninja Gaiden and Mega Man remain some of the absolute best the medium … END_OF_DOCUMENT_TOKEN_TO_BE_REPLACED

Do so, and you’ll probably find that T END_OF_DOCUMENT_TOKEN_TO_BE_REPLACED

I remember when I played my first Resident Evil. It was a gift and couldn’t wait to get it running in my old PS1. That old Capcom “this game contains scenes of explicit violence and gore” plastered on the … END_OF_DOCUMENT_TOKEN_TO_BE_REPLACED

At the beginning of one mission, you are marked for dead by the organization you work for. Your handler has no idea what happened but informs you that they are coming for … END_OF_DOCUMENT_TOKEN_TO_BE_REPLACED

The history of gaming isn’t that old compared to other artistic and entertainment mediums. Many people have lived through the entirety of video game history, and more people have seen most of it. As such, you’d think that the … END_OF_DOCUMENT_TOKEN_TO_BE_REPLACED

(Updated 4/18/22) Even at a time when it feels like every game is being adapted into a show or movie, the news that Twisted Metal is being turned into a TV series stands out. Why? Well, it probably has … END_OF_DOCUMENT_TOKEN_TO_BE_REPLACED

(Updated 4/15/22) The reveal of the Mortal Kombat movie trailer and news that Street Fighter characters are joining the Fortnite roster has both legendary franchises on the minds of gamers everywhere. So, it’s only natural that fans have also … END_OF_DOCUMENT_TOKEN_TO_BE_REPLACED

While Super Smash Brothers for the Wii U and 3DS has been out for just over a year and the recent announcement of Cloud joining the roster garnering a massive amount of hype, many fans of the fighting game … END_OF_DOCUMENT_TOKEN_TO_BE_REPLACED

I’ll admit that I’ve never been a fan of visual novels. I have nothing against them; it just isn’t a genre I’m interested in. That said, MangaGamer’s announcement a while back that their upcoming Steam release of Kindred Spirits … END_OF_DOCUMENT_TOKEN_TO_BE_REPLACED

Black Shell Media is a multimedia marketing and PR studio specializing in distribution and publishing of indie games! We do a lot of marketing and work with websites, … END_OF_DOCUMENT_TOKEN_TO_BE_REPLACED

The month of October is here, and the spooky festivities are starting. However, it is still key to be aware of the other important events happening around this time of the year. For example, October is Breast Cancer Awareness month. … END_OF_DOCUMENT_TOKEN_TO_BE_REPLACED