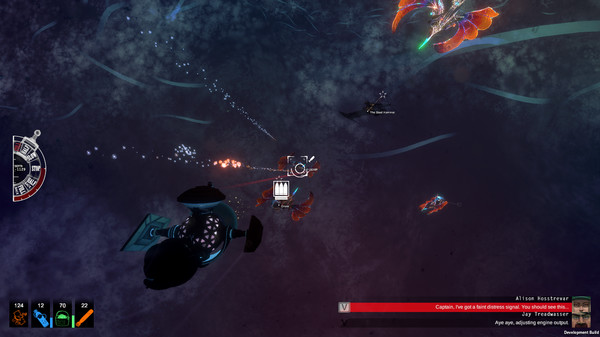 I’m back with another batch of recent indie releases that may have slipped past your radar. As always I don’t guarantee that these games are good, just that they stood out amongst Steam’s usual weekly releases. Be sure to read user reviews for more information about each title.

Let’s kick things off with Diluvion, an FTL-like submarine combat game set in a Jules Verne-esque deep sea world. Centuries ago, the Great Flood engulf the planet. Whole kingdoms and cultures have developed beneath the sea, and as a fresh-faced submarine captain with a crew of greenhorns, you are given the opportunity to explore the unknown depths for fame and fortune. Manage your crew and limited resources as you venture ever further from civilization. All the management takes place in a 2D representation of your vessel, while navigation and combat comes in the form of a 3D shooter. You can also find Diluvion on GOG.

A House of Many Doors

A House of Many Doors is another recent title all about exploring a bizarre new universe. Recruit your crew, board your scuttling mechanical centipede train, and explore The House, a parasite dimension that steals resources from other worlds. The game is heavily inspired by Sunless Sea and the Fallen London series, and even received some support from Failbetter Games. Much like the games that influenced it, A House of Many Doors features a branching story told through lengthy and atmospheric text-based encounters, with a bit of turn-based combat thrown in for good measure.

Warlock’s Tower is a punishingly difficult real-time puzzle game with a graphical aesthetic pulled right from the original Gameboy. Dodge enemies and solve puzzles in all 100+ rooms to escape the tower. The trick is that each step costs you a life, forcing you to carefully plot out each move before committing. You can also find Warlock’s Tower on mobile, Vita, and 3DS.

The incomprehensibly titled Rosenkreuzstilette is the latest Japanese indie action platformer to be localized by Playism. This German word salad is essentially an NES Megaman game with 100% more chibi anime waifus. You can tackle the game’s levels in any order you choose, with the boss of each level granting you a new power that can make future encounters easier to beat.

Poi is a new 3D platformer that recently released from Early Access and is inspired by classics from the N64 and PS1 era. Play as one of two kids and explore uncharted lands in search of all 100 Explorer Medallions to gain the title of Master Explorer.

Alwa’s Awakening is an 8-bit Metroidvania that hopes to recreate the look and feel of popular NES games. The game features over 400 unique rooms full of enemies, puzzles, and secrets to discover. The puzzles usually revolve around your upgradable magic staff and its ability to conjure blocks and other objects to overcome the game’s trap-laden dungeons.

Another retro-inspired new release is Double Dragon IV, brought to you by the developers of the popular Guilty Gear franchise. This latest game brings the series back to its ’80s arcade roots, both in terms of mechanics and visuals. Unfortunately, the game has a mixed reception thus far, with frequent complaints being the lack of online multiplayer and mechanics that are perhaps a tad too old school for some players.

Finally we come to Gunman Taco Truck, a post-apocalyptic adventure where mutants roam the world and tacos are scarce. Travel between towns in your taco truck, killing mutants along the way to harvest their parts as ingredients for your delicious tacos. Use your taco profits to upgrade your truck’s weaponry and restock on supplies so you can make it to North America’s final safe haven.

Not enough games for you? Check out some of these other titles as well:

That’s all for this week. I’ll be back soon with more overlooked indie releases.

The science-fiction horror game, originally released in 2008, was a massive success that influenced an entire generation of games within space/horror genre. Despite the … END_OF_DOCUMENT_TOKEN_TO_BE_REPLACED

After months of speculation regarding the release of an upgraded Switch system, Nintendo finally revealed its latest gaming system — the Nintendo Switch OLED Model. The new Switch will release on October 8, costs $349.99, and offers a long list … END_OF_DOCUMENT_TOKEN_TO_BE_REPLACED

The Legend of Zelda: Breath of the Wild’s critical acclaim is often met with the counter of being “overrated” by some players. There are usually numerous reasons for this – both notable and ridiculous – but one of the … END_OF_DOCUMENT_TOKEN_TO_BE_REPLACED

I remember when I played my first Resident Evil. It was a gift and couldn’t wait to get it running in my old PS1. That old Capcom “this game contains scenes of explicit violence and gore” plastered on the … END_OF_DOCUMENT_TOKEN_TO_BE_REPLACED

At the beginning of one mission, you are marked for dead by the organization you work for. Your handler has no idea what happened but informs you that they are coming for … END_OF_DOCUMENT_TOKEN_TO_BE_REPLACED

If you were to bet me $20 that Amazon would be making an MMORPG at some point, I would still find some reason to not give it to you. Amazon games announced 3 new PC games to try to … END_OF_DOCUMENT_TOKEN_TO_BE_REPLACED

The Legend of Zelda: Breath of the Wild’s critical acclaim is often met with the counter of being “overrated” by some players. There are usually numerous reasons for this – both notable and ridiculous – but one of the … END_OF_DOCUMENT_TOKEN_TO_BE_REPLACED

I don’t play a lot of Apex Legends anymore. I enjoyed the game for a while, but there aren’t many games I’ve stayed with consistently over the long haul since the lost years of World of Warcraft. These days there … END_OF_DOCUMENT_TOKEN_TO_BE_REPLACED

Diehard fans of Call of Duty’s groundbreakingly successful battle royale – Warzone – have been eagerly anticipating the release of a new map for months now. … END_OF_DOCUMENT_TOKEN_TO_BE_REPLACED

While Super Smash Brothers for the Wii U and 3DS has been out for just over a year and the recent announcement of Cloud joining the roster garnering a massive amount of hype, many fans of the fighting game … END_OF_DOCUMENT_TOKEN_TO_BE_REPLACED

I’ll admit that I’ve never been a fan of visual novels. I have nothing against them; it just isn’t a genre I’m interested in. That said, MangaGamer’s announcement a while back that their upcoming Steam release of Kindred Spirits … END_OF_DOCUMENT_TOKEN_TO_BE_REPLACED

Black Shell Media is a multimedia marketing and PR studio specializing in distribution and publishing of indie games! We do a lot of marketing and work with websites, … END_OF_DOCUMENT_TOKEN_TO_BE_REPLACED

Wondering if you can run Halo Infinite on your laptop or desktop? Sure, why not? Halo Infinite has launched in open beta mode (Nov. 16, 2021) and will officially release on Dec. 8, 2021. The game is the sixth in … END_OF_DOCUMENT_TOKEN_TO_BE_REPLACED