Trading card games are mainstreaming again, and companies like Wizards of the Coast are proving they can have their cake and eat it too with the release of MTG Arena. Wizards entered the tabletop gaming scene like a typhoon in 1993, blowing minds with stunning art and tactical gameplay with the now iconic Magic the Gathering.

Why Magic The Gathering Is Still Relevant 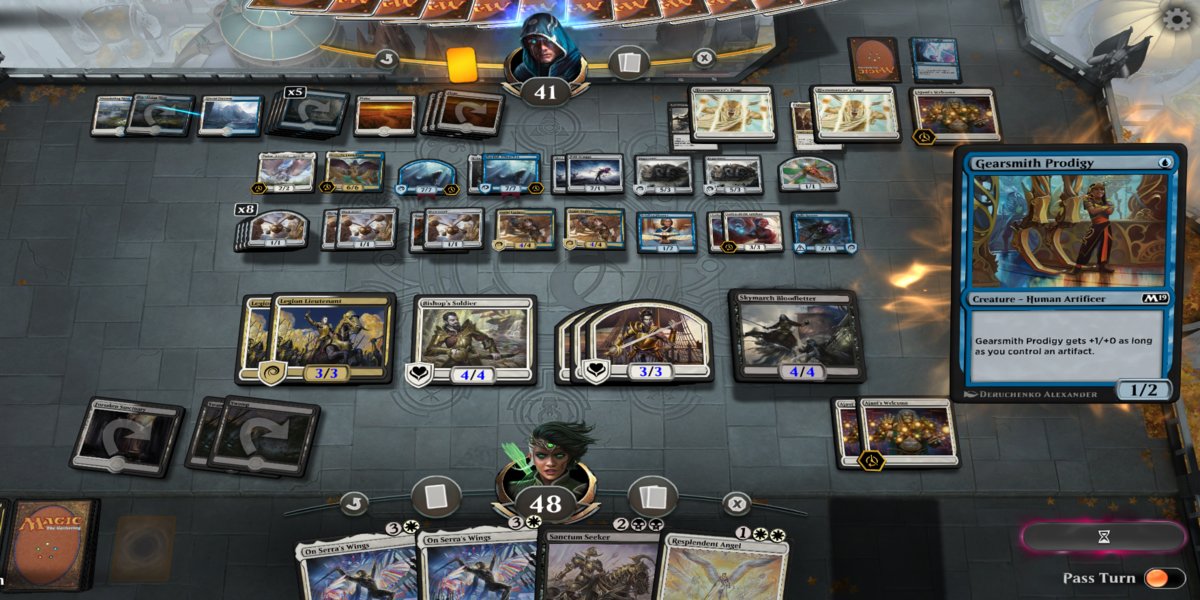 Image via Wizards of the Coast, MTG Arena

Riding off the lessons learned from Magic: The Gathering Online (2017), MTG Arena (open beta launch September 2018) is taking the online trading card experience to a whole new level. Available only on PC for the moment, MTG Arena is an FTP (free-to-play) game without the usual cash grabs and poorly designed mechanics gamers are used to dealing with.

Those who have never played Magic, or are returning after a couple decade hiatus, will find the systems easy to understand and the visuals stunning. Even the gameplay mechanics are smooth and adaptable, helping newbies play complicated symbiotic decks without having to memorize steps.

MTG Arena also makes sure new players have an abundance of pre-made mono and dual color decks to play with, allowing them to compete with others immediately. Five recent sets make up these pre-made decks (and booster pack purchases) which include Ixalan, Rivals of Ixalan, Dominaria, M19 Core Set, and the most recently released Guilds of Ravnica.

Wizards released an updated patch for MTG Arena on November 15, allowing for players to challenge their friends to an online match for the first time. While far from perfect (needing to coordinate with friend IRL first), developers are hoping to smooth out the kinks prior to its official 2019 release.

Other additions to MTG Arena beta online include links to an event calendar, video tutorials, along with articles on deck building and basic gameplay.  Events include draft competitions and pre-constructed deck competitions, rewarding players with plenty of gold/gems, booster packs, and a variety of single cards (common, uncommon, and rare). Players can even unlock cards they don’t own through special wildcards awarded through booster packs, allowing for precise customization of decks.

MTG For A New Generation

MTG Arena is the flagship trading card game that’ll take Wizards of the Coast into the digital age, allowing for a whole new generation of gamers to experience what many have been for over two decades. It’s also for old guys like me, allowing for intense gameplay (without tapping into my retirement fund) after displacing my cards many moons ago. Grant it, there are a few minor bugs which need to be tweaked, but overall the entire experience is — dare I say, equal to playing IRL — making it relevant to everyone, no matter age, financial status, or skill.

The open beta of MTG Arena is currently available for PC. It’s free to download and free-to-play, with the option of spending money (but not necessary).

New details on 'Whore of the Orient,' for next-gen consoles and PC
Red Dead Redemption 2: Does it Need to be "Fixed?"
Resident Evil 6 Review

Snowfall is here and it is time to cheer! Sorry about that… As different video games pump out their holiday events, plenty get swept under the radar. If you are tired from playing the multiple FPS holiday events … END_OF_DOCUMENT_TOKEN_TO_BE_REPLACED

Welcome ghouls, beasts, tricksters, and every horrific being known to man. The spooky season is upon us and I figured I would indulge in the festivities in my own way. Thus, I have come up with a satirical take on … END_OF_DOCUMENT_TOKEN_TO_BE_REPLACED

Do so, and you’ll probably find that T END_OF_DOCUMENT_TOKEN_TO_BE_REPLACED

I remember when I played my first Resident Evil. It was a gift and couldn’t wait to get it running in my old PS1. That old Capcom “this game contains scenes of explicit violence and gore” plastered on the … END_OF_DOCUMENT_TOKEN_TO_BE_REPLACED

At the beginning of one mission, you are marked for dead by the organization you work for. Your handler has no idea what happened but informs you that they are coming for … END_OF_DOCUMENT_TOKEN_TO_BE_REPLACED

The history of gaming isn’t that old compared to other artistic and entertainment mediums. Many people have lived through the entirety of video game history, and more people have seen most of it. As such, you’d think that the … END_OF_DOCUMENT_TOKEN_TO_BE_REPLACED

(Updated 4/18/22) Even at a time when it feels like every game is being adapted into a show or movie, the news that Twisted Metal is being turned into a TV series stands out. Why? Well, it probably has … END_OF_DOCUMENT_TOKEN_TO_BE_REPLACED

(Updated 4/15/22) The reveal of the Mortal Kombat movie trailer and news that Street Fighter characters are joining the Fortnite roster has both legendary franchises on the minds of gamers everywhere. So, it’s only natural that fans have also … END_OF_DOCUMENT_TOKEN_TO_BE_REPLACED

While Super Smash Brothers for the Wii U and 3DS has been out for just over a year and the recent announcement of Cloud joining the roster garnering a massive amount of hype, many fans of the fighting game … END_OF_DOCUMENT_TOKEN_TO_BE_REPLACED

I’ll admit that I’ve never been a fan of visual novels. I have nothing against them; it just isn’t a genre I’m interested in. That said, MangaGamer’s announcement a while back that their upcoming Steam release of Kindred Spirits … END_OF_DOCUMENT_TOKEN_TO_BE_REPLACED

Black Shell Media is a multimedia marketing and PR studio specializing in distribution and publishing of indie games! We do a lot of marketing and work with websites, … END_OF_DOCUMENT_TOKEN_TO_BE_REPLACED

Snowfall is here and it is time to cheer! Sorry about that… As different video games pump out their holiday events, plenty get swept under the radar. If you are tired from playing the multiple FPS holiday events … END_OF_DOCUMENT_TOKEN_TO_BE_REPLACED

Amazon Prime members can get free games and free in-game content every month that last a certain amount of time. You can jump over to Amazon to sign-up for an account or navigate to the Prime Gaming section to see … END_OF_DOCUMENT_TOKEN_TO_BE_REPLACED