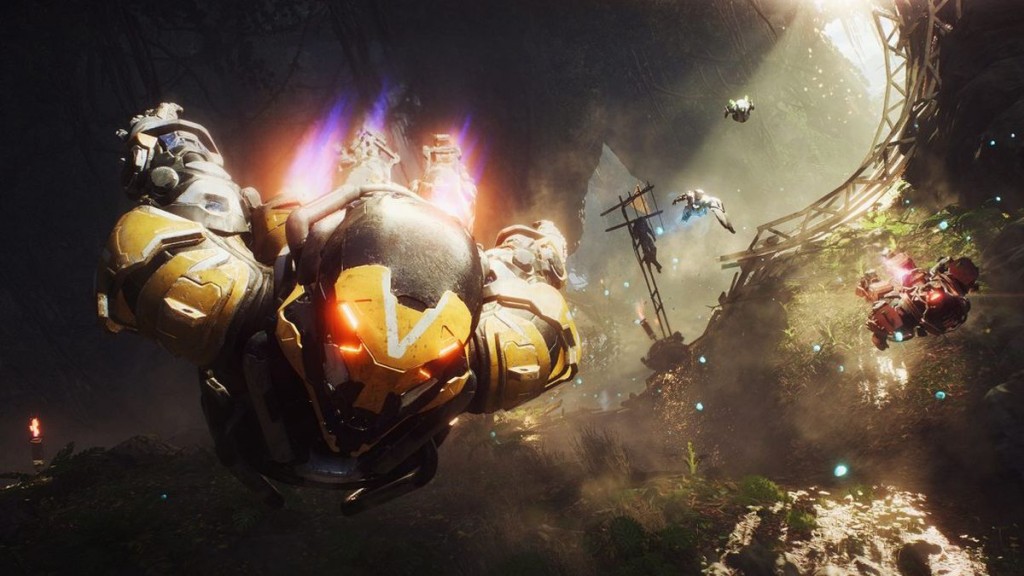 The recent demo for BioWare’s Anthem did not go according to plan.

Between some fairly common connection problems, unforeseen glitches, and some truly awful PC controls, Anthem was plagued with technical issues that turned the game’s grand debut into a trip and stumble.

In theory, none of that matters too much. These early demo tests are usually not expected to be perfect and most modern fans know that such technical problems can be ironed out ahead of a game’s launch. Nothing specific about Anthem‘s demo debut spells doom.

However, there are a lot of little things about the game that make you wonder if Anthem really has a chance to succeed.

First off, it’s entering a market that seemingly has little room for competitors. As an online loot-based shooter, Anthem is going to already be behind the well-established (if undeniably rocky) Destiny and the free-to-play (and rapidly growing) Warframe. You can’t forget that The Division 2 will also soon be entering the subgenre fray. Anthem also shares quite a bit of DNA with the Warframe, which is somewhat unfortunate when you consider what a lead Warframe already has.

It certainly doesn’t help that this particular genre has long been the source of frustration from fans who feel that big name developers often fail to give these titles the kind of long-term treatment they deserve. Again, see Destiny.

This is where Anthem‘s pedigree (“Developed by BioWare!”) and larger budget should lend it some advantages. Sadly, it doesn’t seem like that’s going to be the case.

There was a time when BioWare was one of the premier names in gaming, but after a series of misses (including the disastrous Mass Effect Andromeda) the BioWare name doesn’t mean quite what it used to. Even if it did, Anthem isn’t the kind of game that made BioWare famous (large narrative-based role-playing games).

As for Anthem‘s increased budget, that really only matters if said budget is being used to offer a more polished and substantial experience. The Anthem demo indicates that might not be the case. At the very least, it indicates that Anthem is being treated as yet another major game that will be a long-term “work in progress” funded by those who choose to purchase it early.

Considering that many are still feeling the burn from another game that suffered from a similar problem (Fallout 76), Anthem is faced with the unenviable task of having to prove that it’s different from recent disappointments despite looking and playing relatively similar to them.

On top of it all, you have the EA factor. EA has become notorious for milking every dime out of its games at the expense of the developers and fans. So far, we’ve seen nothing from Anthem that indicates it will be any different.

Actually, that’s not entirely fair. There are elements of Anthem that are actually quite good. Its action is decent enough, its early story shows promise, and there is some beauty to the game’s world. The problem is that Anthem‘s demo was filled with the kind of problems that those most cynical about the game expected it to be filled with.

At a time when the success of Anthem may very well be tied to how many doubters it can win over,  we’ve not seen or played anything from the game that suggests it’s will not ultimately be exactly what everyone fears it will be: an underachieving high-profile title from a publisher known to aspire to nothing more than the bare minimum.

(Updated 4/18/22) Even at a time when it feels like every game is being adapted into a show or movie, the news that Twisted Metal is being turned into a TV series stands out. Why? Well, it probably has … END_OF_DOCUMENT_TOKEN_TO_BE_REPLACED

(Updated 4/15/22) The reveal of the Mortal Kombat movie trailer and news that Street Fighter characters are joining the Fortnite roster has both legendary franchises on the minds of gamers everywhere. So, it’s only natural that fans have also … END_OF_DOCUMENT_TOKEN_TO_BE_REPLACED

Do so, and you’ll probably find that T END_OF_DOCUMENT_TOKEN_TO_BE_REPLACED

Do so, and you’ll probably find that T END_OF_DOCUMENT_TOKEN_TO_BE_REPLACED

I remember when I played my first Resident Evil. It was a gift and couldn’t wait to get it running in my old PS1. That old Capcom “this game contains scenes of explicit violence and gore” plastered on the … END_OF_DOCUMENT_TOKEN_TO_BE_REPLACED

At the beginning of one mission, you are marked for dead by the organization you work for. Your handler has no idea what happened but informs you that they are coming for … END_OF_DOCUMENT_TOKEN_TO_BE_REPLACED

(Updated 4/18/22) Even at a time when it feels like every game is being adapted into a show or movie, the news that Twisted Metal is being turned into a TV series stands out. Why? Well, it probably has … END_OF_DOCUMENT_TOKEN_TO_BE_REPLACED

(Updated 4/15/22) The reveal of the Mortal Kombat movie trailer and news that Street Fighter characters are joining the Fortnite roster has both legendary franchises on the minds of gamers everywhere. So, it’s only natural that fans have also … END_OF_DOCUMENT_TOKEN_TO_BE_REPLACED

The Legend of Zelda: Breath of the Wild’s critical acclaim is often met with the counter of being “overrated” by some players. There are usually numerous reasons for this – both notable and ridiculous – but one of the … END_OF_DOCUMENT_TOKEN_TO_BE_REPLACED

While Super Smash Brothers for the Wii U and 3DS has been out for just over a year and the recent announcement of Cloud joining the roster garnering a massive amount of hype, many fans of the fighting game … END_OF_DOCUMENT_TOKEN_TO_BE_REPLACED

I’ll admit that I’ve never been a fan of visual novels. I have nothing against them; it just isn’t a genre I’m interested in. That said, MangaGamer’s announcement a while back that their upcoming Steam release of Kindred Spirits … END_OF_DOCUMENT_TOKEN_TO_BE_REPLACED

Black Shell Media is a multimedia marketing and PR studio specializing in distribution and publishing of indie games! We do a lot of marketing and work with websites, … END_OF_DOCUMENT_TOKEN_TO_BE_REPLACED