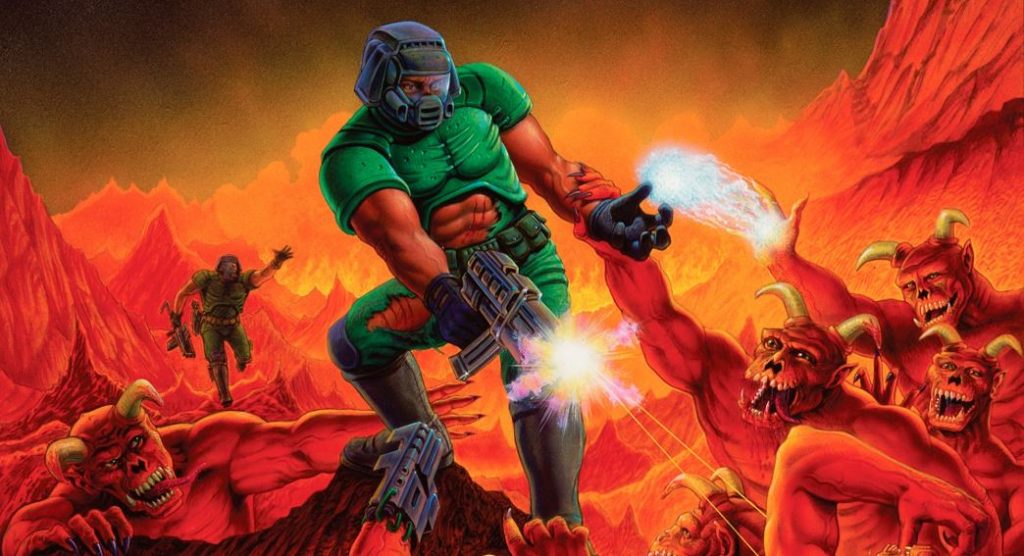 The recent ports of some classic Doom titles to Nintendo Switch and the now-ended Quakecon event have left many thinking about the glory days fo two id Software shooters.

But between Doom and Quake, which franchise was best? We’re going to try to answer that question by taking a quick look at the notable games in each franchise to see which wins this FPS deathmatch.

Released in 1993, the first Doom essentially changed gaming overnight. Not only did it revolutionize the first-person shooter concept, but its violent themes, clear attitude, rocking soundtrack, and multiplayer instantly changed our ideas of what games could (and should) be.

Doom II was odd. Many people agree that it’s a better game than the first, but it was hardly a revolution. Actually, it feels more like an expansion pack to the original game. That’s not really a problem given that it came out just one year after the original, but you can’t help but wonder what this game would have been like had id taken a few years to let the genre grow and then revisit Doom from a fresh perspective.

Doom III stands as one of the most controversial games ever made in terms of fan reception. After quite a bit of hype, some were disappointed to learn that Doom III was a strange blend of a horror game and a classic Doom title. Its odd formula and some bad gameplay decisions (like having to switch to your flashlight) left a bad taste in the mouths of many. Thankfully, updates, mods, and expansions greatly improved the overall experience.

That brings us to 2016’s Doom which was not only what many people felt Doom III should be but is one of best pure shooters of the last decade. Expectations were low for Doom, but it turns out gaming was ready for a pure shooter experience after the industry enjoyed years of increasingly muddled alternatives.

There are various Doom spin-offs (including Doom pinball and a Doom RPG for mobile), but they don’t really do much to alter the legacy of the main Doom titles for good or bad.

The original Quake was probably what Doom II should have been. Thanks to advances in technology, this 1996 title offered a full 3D experience that looked better than Doom and offered a faster, more visceral experience. It also set the stage for a wave of online deathmatch multiplayer titles to come. A recent string of modern indie titles essentially built on the Quake engine reveals how well this one has aged.

Quake II is interesting. Originally designed to be the first game in a different franchise, id assigned it the Quake name after it began to feel closer to that franchise as development progressed. Still, this feels surprisingly different from the Quake that came before. It’s much more story-based, its action is more deliberate (you can even crouch), and levels are much larger than before. Thankfully, multiplayer is as good as ever. Despite some controversy, most people agree that Quake II was a worthwhile follow-up.

Quake III (alongside Unreal Tournament) helped change gaming forever. Some balked at its multiplayer-only design, but it turns out the industry was ready for a new era of online competition. Quake III is considered to be one of the best multiplayer shooters ever made and one of the most important PC games ever made.

You probably don’t remember Quake 4, and there are many good reasons for that. In reality, Quake 4 was a pretty good game. The problem was that its single-player was nowhere near as good as Half-Life 2‘s despite the fact the developers tried to push it more in that direction. Its multiplayer, meanwhile, was a significant step back from Quake III‘s brilliant arena deathmatches.

Enemy Territory: Quake Wars was essentially a reskinned take on Wolfenstein: Enemy Territory. Even if you put aside the fact that it didn’t really feel like Quake at all, it generally felt inferior to Wolfenstein, and it couldn’t really compete with games like Battlefield 1942.

This was actually very close. If you only compared the first three games in each series, you could easily make the argument that Quake was better. However, it’s just been too long since we’ve gotten a truly great Quake game.

On the other hand, there’s never really been a bad Doom game (at least not yet). There were times when Doom wasn’t as exciting as Quake, but we could certainly recommend playing every game in the franchise.

Welcome ghouls, beasts, tricksters, and every horrific being known to man. The spooky season is upon us and I figured I would indulge in the festivities in my own way. Thus, I have come up with a satirical take on … END_OF_DOCUMENT_TOKEN_TO_BE_REPLACED

In 2020 it was revealed developer IO Interactive was working on a James Bond game known as Project 007 which, understandably, shook the video game world. Still in production, there’s a possibility that their James Bond game could be the … END_OF_DOCUMENT_TOKEN_TO_BE_REPLACED

Do so, and you’ll probably find that T END_OF_DOCUMENT_TOKEN_TO_BE_REPLACED

I remember when I played my first Resident Evil. It was a gift and couldn’t wait to get it running in my old PS1. That old Capcom “this game contains scenes of explicit violence and gore” plastered on the … END_OF_DOCUMENT_TOKEN_TO_BE_REPLACED

At the beginning of one mission, you are marked for dead by the organization you work for. Your handler has no idea what happened but informs you that they are coming for … END_OF_DOCUMENT_TOKEN_TO_BE_REPLACED

The history of gaming isn’t that old compared to other artistic and entertainment mediums. Many people have lived through the entirety of video game history, and more people have seen most of it. As such, you’d think that the … END_OF_DOCUMENT_TOKEN_TO_BE_REPLACED

(Updated 4/18/22) Even at a time when it feels like every game is being adapted into a show or movie, the news that Twisted Metal is being turned into a TV series stands out. Why? Well, it probably has … END_OF_DOCUMENT_TOKEN_TO_BE_REPLACED

(Updated 4/15/22) The reveal of the Mortal Kombat movie trailer and news that Street Fighter characters are joining the Fortnite roster has both legendary franchises on the minds of gamers everywhere. So, it’s only natural that fans have also … END_OF_DOCUMENT_TOKEN_TO_BE_REPLACED

While Super Smash Brothers for the Wii U and 3DS has been out for just over a year and the recent announcement of Cloud joining the roster garnering a massive amount of hype, many fans of the fighting game … END_OF_DOCUMENT_TOKEN_TO_BE_REPLACED

I’ll admit that I’ve never been a fan of visual novels. I have nothing against them; it just isn’t a genre I’m interested in. That said, MangaGamer’s announcement a while back that their upcoming Steam release of Kindred Spirits … END_OF_DOCUMENT_TOKEN_TO_BE_REPLACED

Black Shell Media is a multimedia marketing and PR studio specializing in distribution and publishing of indie games! We do a lot of marketing and work with websites, … END_OF_DOCUMENT_TOKEN_TO_BE_REPLACED

Welcome ghouls, beasts, tricksters, and every horrific being known to man. The spooky season is upon us and I figured I would indulge in the festivities in my own way. Thus, I have come up with a satirical take on … END_OF_DOCUMENT_TOKEN_TO_BE_REPLACED

The month of October is here, and the spooky festivities are starting. However, it is still key to be aware of the other important events happening around this time of the year. For example, October is Breast Cancer Awareness month. … END_OF_DOCUMENT_TOKEN_TO_BE_REPLACED