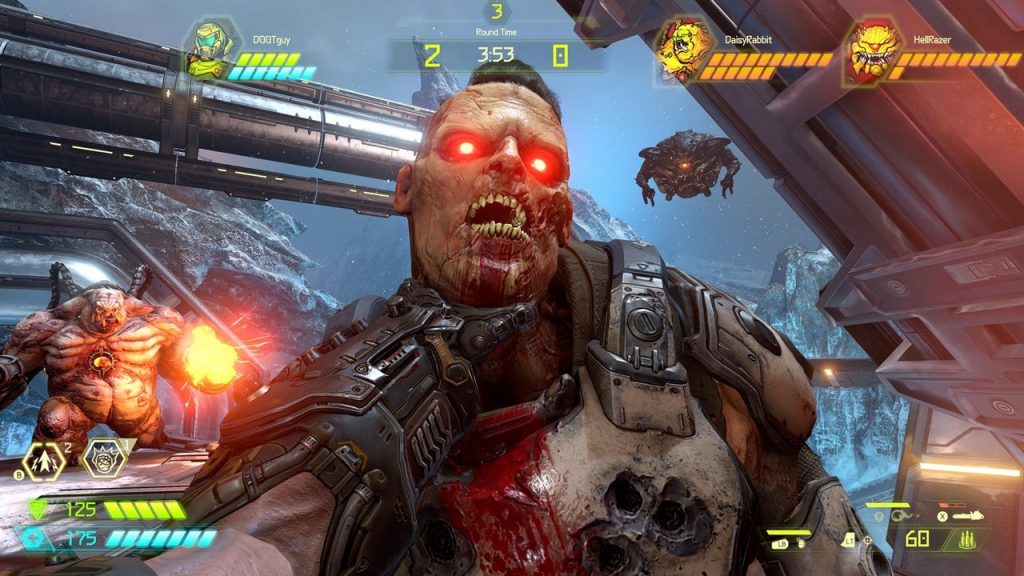 Doom Eternal is very, very good. For conversation’s sake, we could even argue that it’s a great game that offers a refreshing twist on the Doom formula that adheres to the spirit of the franchise while mixing up the general gameplay. At the very least, Doom Eternal is much more than it needed to be.

Well, at least when it comes to the game’s single-player mode. In terms of multiplayer, Doom Eternal is an unnecessarily frustrating exercise in game design that not only feels unworthy of the rest of the game but leaves us wondering why things have to be this way.

For those who don’t know, Doom Eternal‘s primary multiplayer mode is an asymmetrical affair that sees two players assume the role of demons in order to battle one player who serves as the Doom Slayer. It’s reminiscent of the ideas seen in games like Evolve or even Splinter Cell’s Spies vs. Mercs mode.

To be fair, there’s nothing inherently wrong with the mode. It runs well, it features some interesting ideas, and it’s occasionally simply fun to play. Mostly, it feels like a way for multiple people to play through some of the concepts of the campaign.

It kind of is, but what’s really strange is that Bethesda’s Pete Hines recently suggested that Doom Eternal doesn’t feature deathmatch gameplay because it’s an outdated concept that wasn’t really what he thought of when he thought of Doom. He also expressed the team’s desire to do something different.

Obviously, there is no value in resorting to personal attacks regarding his feelings on the subject even though they may initially strike you as frustrating. However, the idea that Doom deathmatch gameplay is somehow outdated is worthy of discussion.

See, Doom 2016 (and certainly still Doom Eternal, to a slightly different extent) was largely defined by the ways that it resurrected the core gameplay concepts of Doom. Said concepts included things like pure action gameplay, complex maps filled with collectibles, and even a humorously indifferent approach to storytelling. It was old-school, but it found a way to liven those classic concepts by incorporating some modern ideas.

Doom 2016’s multiplayer attempted something similar by adding mechanics to otherwise standard deathmatch options which let you do things like acquire power-ups to become a demon. It was a welcome attempt to liven things up that was actually quite fun in and of itself, but it ultimately fell short of its goal.

While that mode was not developed by the folks at id Software, it feels odd that they decided to essentially abandon the deathmatch concept entirely with Doom Eternal. It’s not only odd to play a Doom game that doesn’t feature some form of deathmatch gameplay, but it ensures that Doom Eternal is part of a troubling trend in the FPS market which forces gamers to choose between single-player and multiplayer experiences.

Some of the best FPS games ever (a list that includes games like Doom, Halo: Combat Evolved, and Call of Duty 4: Modern Warfare) have featured full campaigns and extensive competitive multiplayer modes. Those are obviously exceptional examples, but you can tell by the age of those games that the hope to ship such titles that featured both has seemingly been dwindling in recent years.

Doom Eternal‘s multiplayer is, at best, a worthwhile distraction that is somewhat creative. What it’s not, though, is a multiplayer mode that stands tall on its own as something you’ll be playing months from now with your friends and against others online. This not only hurts the value of Doom Eternal in the long run, but it furthers the perception that Doom is somehow becoming a “single-player” series.

The quality of Doom and Doom Eternal suggests that id has the talent to create a compelling competitive multiplayer experience that may be slightly different from what came before but is just as fun. Without such a mode, Doom Eternal (and future Doom games) will just feel somewhat incomplete.

Snowfall is here and it is time to cheer! Sorry about that… As different video games pump out their holiday events, plenty get swept under the radar. If you are tired from playing the multiple FPS holiday events … END_OF_DOCUMENT_TOKEN_TO_BE_REPLACED

Welcome ghouls, beasts, tricksters, and every horrific being known to man. The spooky season is upon us and I figured I would indulge in the festivities in my own way. Thus, I have come up with a satirical take on … END_OF_DOCUMENT_TOKEN_TO_BE_REPLACED

Do so, and you’ll probably find that T END_OF_DOCUMENT_TOKEN_TO_BE_REPLACED

I remember when I played my first Resident Evil. It was a gift and couldn’t wait to get it running in my old PS1. That old Capcom “this game contains scenes of explicit violence and gore” plastered on the … END_OF_DOCUMENT_TOKEN_TO_BE_REPLACED

At the beginning of one mission, you are marked for dead by the organization you work for. Your handler has no idea what happened but informs you that they are coming for … END_OF_DOCUMENT_TOKEN_TO_BE_REPLACED

The history of gaming isn’t that old compared to other artistic and entertainment mediums. Many people have lived through the entirety of video game history, and more people have seen most of it. As such, you’d think that the … END_OF_DOCUMENT_TOKEN_TO_BE_REPLACED

(Updated 4/18/22) Even at a time when it feels like every game is being adapted into a show or movie, the news that Twisted Metal is being turned into a TV series stands out. Why? Well, it probably has … END_OF_DOCUMENT_TOKEN_TO_BE_REPLACED

(Updated 4/15/22) The reveal of the Mortal Kombat movie trailer and news that Street Fighter characters are joining the Fortnite roster has both legendary franchises on the minds of gamers everywhere. So, it’s only natural that fans have also … END_OF_DOCUMENT_TOKEN_TO_BE_REPLACED

While Super Smash Brothers for the Wii U and 3DS has been out for just over a year and the recent announcement of Cloud joining the roster garnering a massive amount of hype, many fans of the fighting game … END_OF_DOCUMENT_TOKEN_TO_BE_REPLACED

I’ll admit that I’ve never been a fan of visual novels. I have nothing against them; it just isn’t a genre I’m interested in. That said, MangaGamer’s announcement a while back that their upcoming Steam release of Kindred Spirits … END_OF_DOCUMENT_TOKEN_TO_BE_REPLACED

Black Shell Media is a multimedia marketing and PR studio specializing in distribution and publishing of indie games! We do a lot of marketing and work with websites, … END_OF_DOCUMENT_TOKEN_TO_BE_REPLACED

Snowfall is here and it is time to cheer! Sorry about that… As different video games pump out their holiday events, plenty get swept under the radar. If you are tired from playing the multiple FPS holiday events … END_OF_DOCUMENT_TOKEN_TO_BE_REPLACED

Amazon Prime members can get free games and free in-game content every month that last a certain amount of time. You can jump over to Amazon to sign-up for an account or navigate to the Prime Gaming section to see … END_OF_DOCUMENT_TOKEN_TO_BE_REPLACED