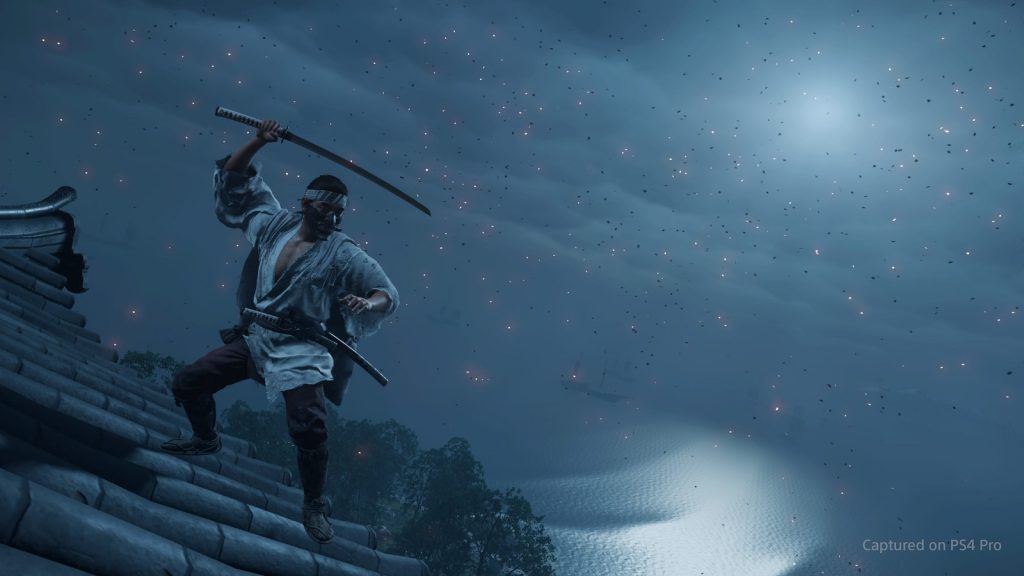 Ghost of Tsushima is many things, but one of its best features happens to be its incredible visuals and consistently brilliant art design. Those qualities make it the perfect environment for a photo mode.

So which games have the best photo modes? The answer to that question is obviously subjective, but we don’t think you’ll disagree with the quality of these brilliant in-game photography systems. 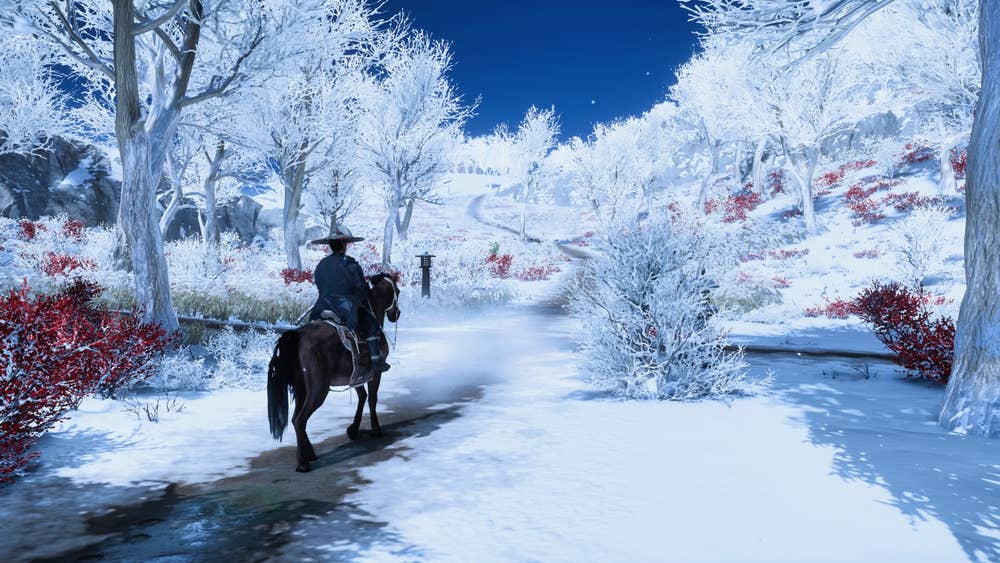 Ghost of Tsushima may have only just been released, but there’s little doubt that it features one of the best photo modes in gaming.

It starts with the tools. Ghost of Tsushima lets you do things like adjust the speed of the win and add music to your images. These seemingly simple features enhance the cinematic flavor that the entire game is built around.

That’s the other great thing about Ghost of Tsushima‘s photo mode. The entire game is designed to capture the incredible photography of Akira Kurosawa’s samurai films, which means there’s no shortage of incredible photo opportunities designed to inspire your artistic side. 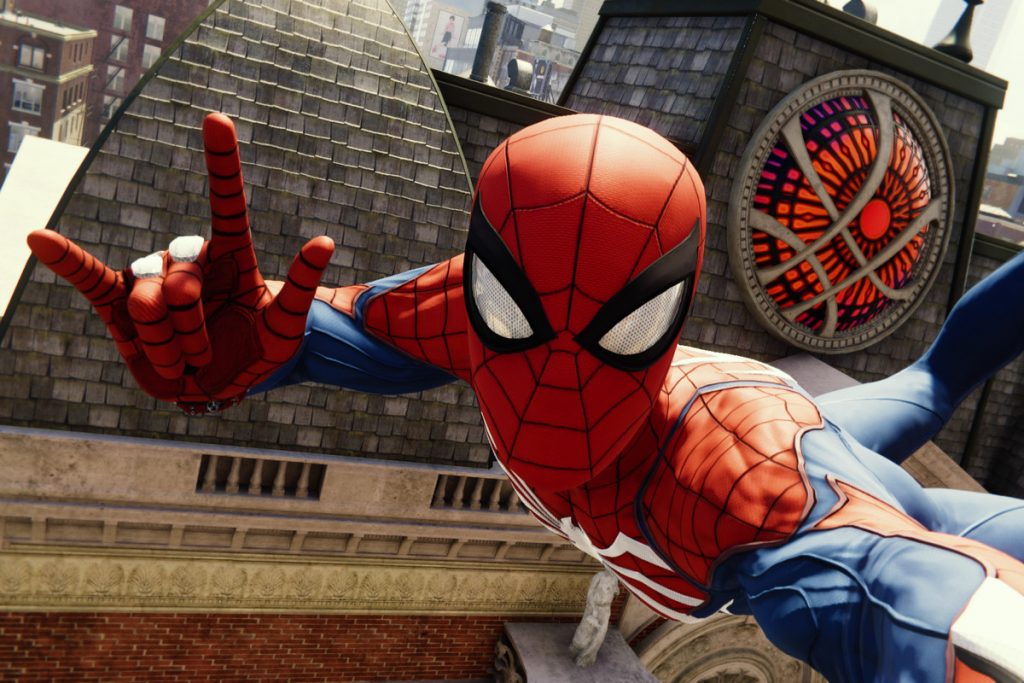 There’s a strong case to be made that Marvel’s Spider-Man features the absolute best photo mode ever put into a video game.

Perhaps because young Peter Parker is an aspiring photojournalist, but we’ve rarely seen a game that features such professional photography features. The entire photo mode is designed to capture the feeling that you’re trying to take photos of Spider-Man in order to sell to the Daily Bugle, and it succeeds in that endeavor.

Best of all, you’re even able to put your photos on comic book covers and other creative backgrounds. It’s just a true joy to play around with. 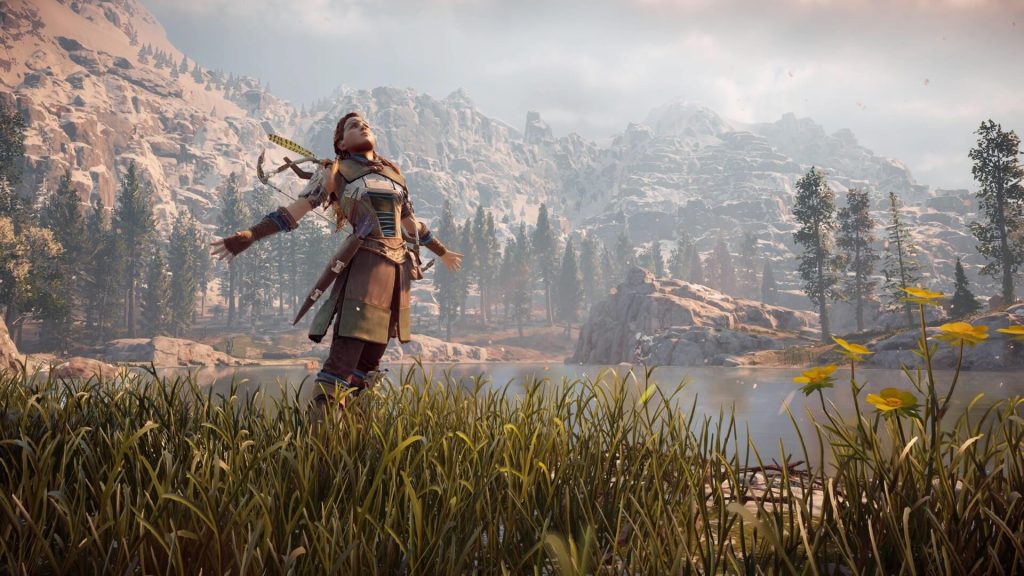 Horizon Zero Dawn wasn’t the first game to feature a photo mode, but it’s arguably one of the games that raised the bar for that concept.

In Horizon Zero Dawn, photos are all about scope and vistas. The game’s wide-open spaces populated by roaming mechanical monsters are perfect for some truly special photos that you’d never be able to capture in any other game.

While the action shots in Horizon Zero Dawn are usually quite good, this is one of those games that trained us to stop, look around, and really search for that perfect photo opportunity. 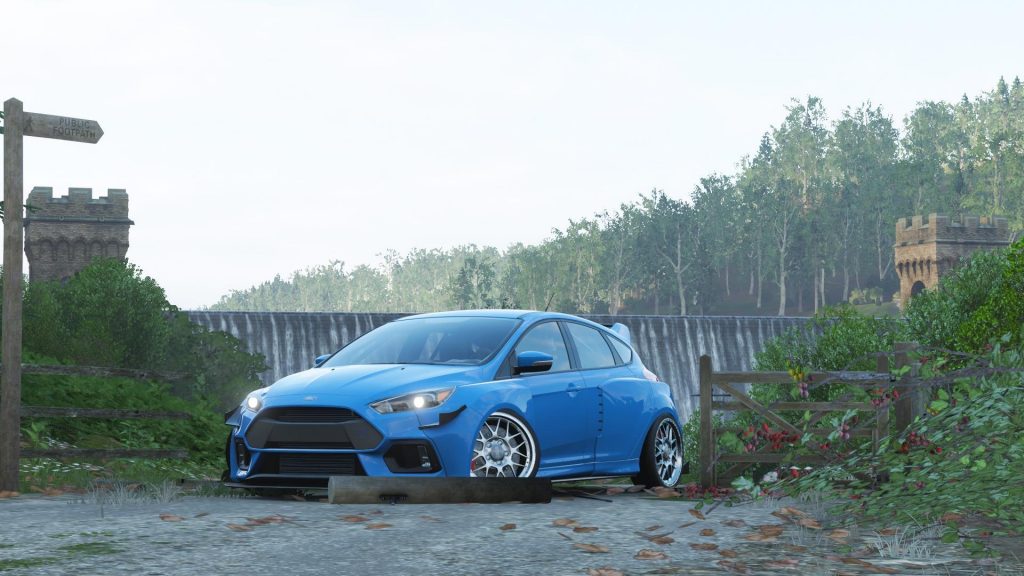 Forza Horizon 4‘s stunning visuals and incredible landscapes put it in the running for the best video game photo modes, but it’s really the cars that put this one over the top.

Other driving games feature photo modes, but none can compare to what Forza Horizon 4 offers in terms of sheer visual quality. The appeal of such racing games was always based on the ability to “drive” cars you’d never even seen in real life, but Forza goes a step beyond by offering you the chance to take eternally beautiful photos of those same vehicles.

Forza Horizon 4‘s developers have also done an excellent job of promoting the best in-game photos which only encourages you further to explore the possibilities. 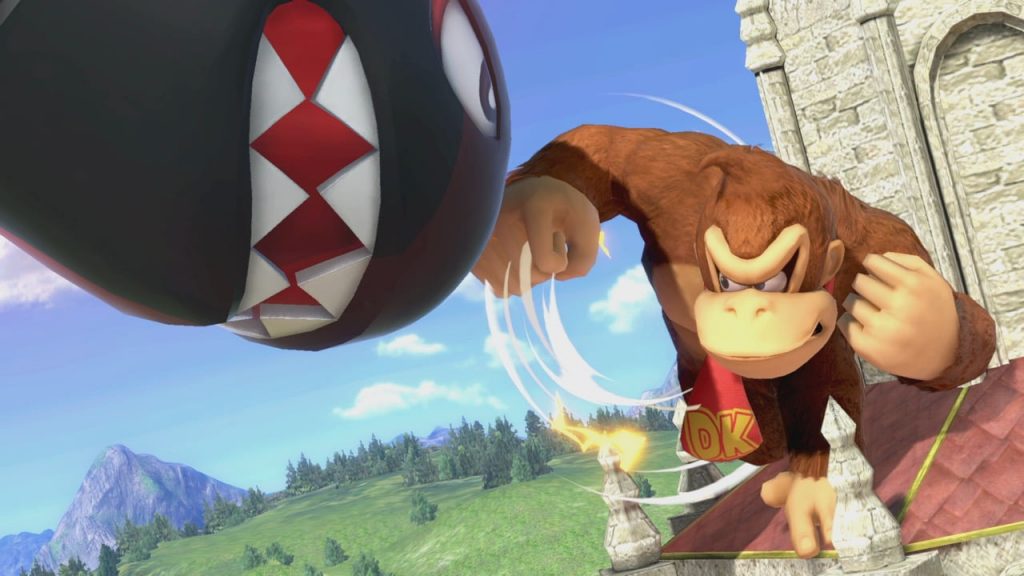 Truth be told, the photo mode in Super Smash Bros. Ultimate doesn’t really compare to the best photo modes in other games in terms of tools. It more than makes up for it, though, when it comes to subjects.

Ultimate features the largest roster of classic Nintendo characters (and other legendary characters from outside companies) in franchise history. Having the chance to snap photos of these characters together in one place is appealing enough, but you’d be amazed by how many incredible moments happen in this game which you’ll want to capture forever.

Nintendo has created some excellent photo modes over the years, but this is one of the best. 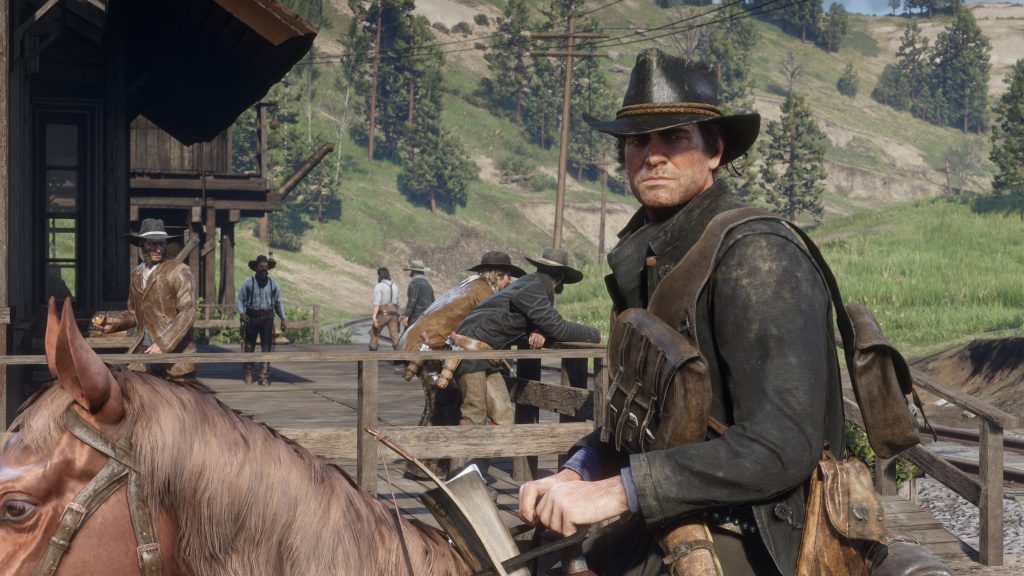 Granted, Red Dead Redemption has to stretch its internal logic a bit in order to justify an old-west photo mode, but we’re thrilled that Rockstar made that effort.

Red Dead Redemption 2 features some of the most stunning environments in video game history. The shots that you’re able to capture in this game are truly stunning, yet there are few obvious “photo moments.”

That means that Red Dead Redemption 2 forces you to find (and sometimes create) the best photo moments in order to take advantage of this exciting tool and produce some truly exciting screenshots. 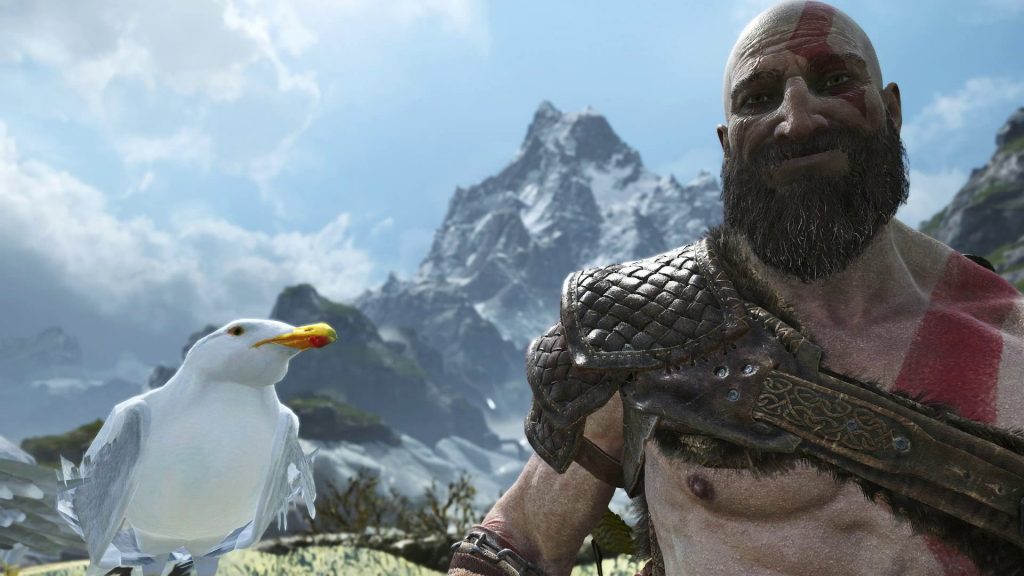 Does it make much sense for Kratos to smile for a selfie? No, but that’s the fun part of the experience. Here’s a photo mode that exists outside of the logic of the game itself, which is perfectly fine with us considering that such modes are supposed to be fun in the first place.

Of course, if you really want to take impressive, dramatic photos within God of War, there are plenty of opportunities to do so.

The history of gaming isn’t that old compared to other artistic and entertainment mediums. Many people have lived through the entirety of video game history, and more people have seen most of it. As such, you’d think that the … END_OF_DOCUMENT_TOKEN_TO_BE_REPLACED

30+ years on, there’s somehow nothing quite like an NES action game. From the soundtracks to the level design and airtight mechanics, classic NES games like Ninja Gaiden and Mega Man remain some of the absolute best the medium … END_OF_DOCUMENT_TOKEN_TO_BE_REPLACED

(Updated 4/18/22) Even at a time when it feels like every game is being adapted into a show or movie, the news that Twisted Metal is being turned into a TV series stands out. Why? Well, it probably has … END_OF_DOCUMENT_TOKEN_TO_BE_REPLACED

Do so, and you’ll probably find that T END_OF_DOCUMENT_TOKEN_TO_BE_REPLACED

I remember when I played my first Resident Evil. It was a gift and couldn’t wait to get it running in my old PS1. That old Capcom “this game contains scenes of explicit violence and gore” plastered on the … END_OF_DOCUMENT_TOKEN_TO_BE_REPLACED

At the beginning of one mission, you are marked for dead by the organization you work for. Your handler has no idea what happened but informs you that they are coming for … END_OF_DOCUMENT_TOKEN_TO_BE_REPLACED

The history of gaming isn’t that old compared to other artistic and entertainment mediums. Many people have lived through the entirety of video game history, and more people have seen most of it. As such, you’d think that the … END_OF_DOCUMENT_TOKEN_TO_BE_REPLACED

(Updated 4/18/22) Even at a time when it feels like every game is being adapted into a show or movie, the news that Twisted Metal is being turned into a TV series stands out. Why? Well, it probably has … END_OF_DOCUMENT_TOKEN_TO_BE_REPLACED

(Updated 4/15/22) The reveal of the Mortal Kombat movie trailer and news that Street Fighter characters are joining the Fortnite roster has both legendary franchises on the minds of gamers everywhere. So, it’s only natural that fans have also … END_OF_DOCUMENT_TOKEN_TO_BE_REPLACED

While Super Smash Brothers for the Wii U and 3DS has been out for just over a year and the recent announcement of Cloud joining the roster garnering a massive amount of hype, many fans of the fighting game … END_OF_DOCUMENT_TOKEN_TO_BE_REPLACED

I’ll admit that I’ve never been a fan of visual novels. I have nothing against them; it just isn’t a genre I’m interested in. That said, MangaGamer’s announcement a while back that their upcoming Steam release of Kindred Spirits … END_OF_DOCUMENT_TOKEN_TO_BE_REPLACED

Black Shell Media is a multimedia marketing and PR studio specializing in distribution and publishing of indie games! We do a lot of marketing and work with websites, … END_OF_DOCUMENT_TOKEN_TO_BE_REPLACED