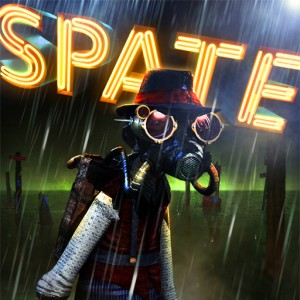 Eric Provan’s Spate, a 2.5d platformer set in a phenomenal surrealist steampunk world where a spate of rain continues to flood a world forced to resort to steam technology, is set to be one of the next big Greenlight games on Steam. The world is an interesting mash-up of visual styles that span the likes of Bioshock crossed with a heavy helping of Tim Burton’s dark eccentric themes. The game tells the story of Detective Bluth, a private investigator hired by an unnamed woman to follow her husband who takes daily trips into what is called the ‘X Zone’. When not fighting his way through the environments of the X Zone, he is battling with his grief over the death of his daughter.

This is where Spate has an unusual mechanic: it uses a particularly extreme alcoholic beverage to give your character temporary superpowers that are necessary to complete the game’s many challenges. Granted, alcohol has been used in games both current and classic to give the player special abilities and humorous effects, but it is unique in this regard in that it is both a central game mechanic and an actual part of the game’s emotional themes. The trailer shows Bluth being able to run and high speeds, jump long distances, and see things that were otherwise not visible. The level of intoxication is shown via what looks But it is also used for a different and much more somber purpose. A father has lost his daughter, and he gulps Absinthe to numb the pain.

Absinthe is not your Superbowl Sunday libation and certainly not your relaxing bottle of suds at the end of the day. But rather an oft-banned drink that must be diluted in a certain way before it can be safely imbibed. Yet in Spate, it gives the man super powers, and likely with a high cost that plays into the mystery at the heart of Bluth’s story. It is not new for games to deal with real world problems in a gaming fashion, such as in Depression Quest which illuminates the burden of living with clinical depression. But unlike Hotline Miami, a game that is both a celebration and a social commentary on video game violence of the most brutal kind, Spate has touched on a serious note that could very well be an effective theme at the end of the game. As mentioned on the game’s info site, “The mechanic is meant to mirror the emotional seesaw battle of drinking.”

Spate is available for preorder for $10.00 and likely will be available soon via Steam Greenlight.

Why is EA coming back to Steam?
"Not On Steam" Sale Is Exactly What It Sounds Like
Monaco: One Vault at a Time

Everything is an RPG

Snowfall is here and it is time to cheer! Sorry about that… As different video games pump out their holiday events, plenty get swept under the radar. If you are tired from playing the multiple FPS holiday events … END_OF_DOCUMENT_TOKEN_TO_BE_REPLACED

Welcome ghouls, beasts, tricksters, and every horrific being known to man. The spooky season is upon us and I figured I would indulge in the festivities in my own way. Thus, I have come up with a satirical take on … END_OF_DOCUMENT_TOKEN_TO_BE_REPLACED

Do so, and you’ll probably find that T END_OF_DOCUMENT_TOKEN_TO_BE_REPLACED

I remember when I played my first Resident Evil. It was a gift and couldn’t wait to get it running in my old PS1. That old Capcom “this game contains scenes of explicit violence and gore” plastered on the … END_OF_DOCUMENT_TOKEN_TO_BE_REPLACED

At the beginning of one mission, you are marked for dead by the organization you work for. Your handler has no idea what happened but informs you that they are coming for … END_OF_DOCUMENT_TOKEN_TO_BE_REPLACED

The history of gaming isn’t that old compared to other artistic and entertainment mediums. Many people have lived through the entirety of video game history, and more people have seen most of it. As such, you’d think that the … END_OF_DOCUMENT_TOKEN_TO_BE_REPLACED

(Updated 4/18/22) Even at a time when it feels like every game is being adapted into a show or movie, the news that Twisted Metal is being turned into a TV series stands out. Why? Well, it probably has … END_OF_DOCUMENT_TOKEN_TO_BE_REPLACED

(Updated 4/15/22) The reveal of the Mortal Kombat movie trailer and news that Street Fighter characters are joining the Fortnite roster has both legendary franchises on the minds of gamers everywhere. So, it’s only natural that fans have also … END_OF_DOCUMENT_TOKEN_TO_BE_REPLACED

While Super Smash Brothers for the Wii U and 3DS has been out for just over a year and the recent announcement of Cloud joining the roster garnering a massive amount of hype, many fans of the fighting game … END_OF_DOCUMENT_TOKEN_TO_BE_REPLACED

I’ll admit that I’ve never been a fan of visual novels. I have nothing against them; it just isn’t a genre I’m interested in. That said, MangaGamer’s announcement a while back that their upcoming Steam release of Kindred Spirits … END_OF_DOCUMENT_TOKEN_TO_BE_REPLACED

Black Shell Media is a multimedia marketing and PR studio specializing in distribution and publishing of indie games! We do a lot of marketing and work with websites, … END_OF_DOCUMENT_TOKEN_TO_BE_REPLACED

Snowfall is here and it is time to cheer! Sorry about that… As different video games pump out their holiday events, plenty get swept under the radar. If you are tired from playing the multiple FPS holiday events … END_OF_DOCUMENT_TOKEN_TO_BE_REPLACED

Amazon Prime members can get free games and free in-game content every month that last a certain amount of time. You can jump over to Amazon to sign-up for an account or navigate to the Prime Gaming section to see … END_OF_DOCUMENT_TOKEN_TO_BE_REPLACED