Driftmoon is a quaint little RPG released by Finnish developer Instant Kingdom. This title has been in the works for a long time, the website claims seven years, and it was part of Steam’s Greenlight program for the summer of 2011. Since then, there has been a demo available which the user community has been very supportive of and there are already a ton of mods available for those that want to continue their time in the world of Driftmoon. Everything from simple aesthetic alterations to complete missions and side-quests are available and the game just officially launched at the end of February 2013 in its final form.

The magical story that IK has put together is amazingly immersive and a blast to play for old-school RPG fans like me; give me a sword, a bow,  and some magic and I will defend/save whatever kingdom you have programmed. Now, when I say quaint and little, I do mean that, Driftmoon’s main campaign takes only about ten or eleven hours to play through but there are enough side-quests available in the game’s various locations to keep you occupied for about twice that time. You play as a young man whose world is flipped upside down when he returns to his home village, Northrop, only to have his own mother push him into a well. It turns out that this was the only way to save you from the evil descending upon the people of Northrop in the form of angry magic-capable lizards known as the Rakan who are searching for the broken pieces of an Amulet of Life. These “lizard wizards” are being used by an evil king from the past, Ixal, who is also the creator of the amulet. 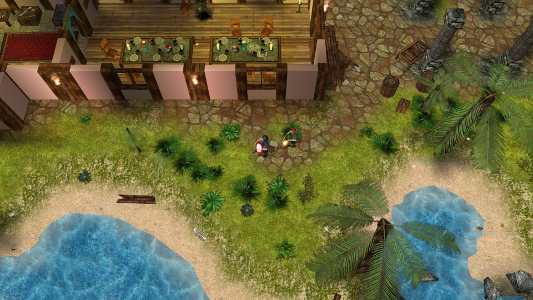 As you embark upon the main mission to locate all the pieces of said amulet and purify it so that it will never be used for evil purposes again, there are plenty of memorable characters you meet along the way that have as much riding on Ixal’s final defeat as you. A firefly by the name of Fizz, an uppity panther queen whose attitude about your current actions was her most memorable trait, and your own brother, who spends part of the game as an actual person and the later part as a skeleton are a few of the personalities that assist you throughout the story. The story itself is really, really in-depth and fleshed out, the time I spent reading notes, books, and old newspaper articles was relative to ten hours spent in a much bigger example of the genre such as Bioware’s Dragon Age or Bethesda’s Elder Scrolls series. I even noticed many passive and obvious references to established fantasy worlds like the Lord of the Rings trilogy and Monty Python’s Quest for the Holy Grail. 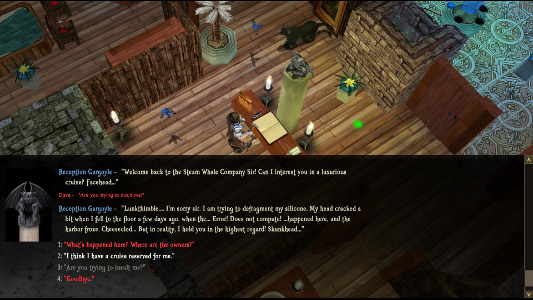 The combat system was a bit watered down compared to some other RPGs but it worked well with the scope of the rest of the project and the story was more than enough to make up for the lack of action in this title. You have the option to carry a melee weapon, bow, and eventually a magic staff but this serves as your melee weapon, there are no magical spells to hurl at enemies so no pure mage gameplay here. Each enemy vanquished as well as completion of the various quests provide experience points to level up your character, I ended the game at level twenty-two and I liked that I was able to level up right into the end-game. The only issue that I had with the game was the camera angle, it is a top-down perspective which is very normal in a game like this, but the levels were sometimes difficult to traverse in this restrictive viewpoint. Speaking of the levels themselves, I loved the visual style of this game! It was perfect for the story that was being told; the color palette and environments could be described as absolutely enchanting and were possibly my favorite aspect of this experience. 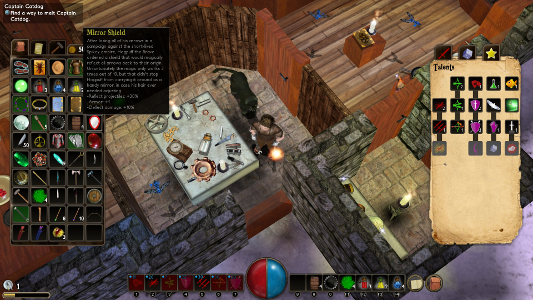 Overall, I enjoyed my time in the world of Driftmoon, I got it for fifteen bucks at desura.com, through their app that is very similar to Steam or the GameStop app and I am perfectly okay with spending that money on a game like this, the editor and availability of so many mods work to extrapolate the value. If you are a fantasy fan of any level and you long for the warm fuzzy feeling that you used to get when you booted up Baldur’s Gate, try out Driftmoon, it is a move in the right direction for Instant Kingdom and I will be watching hopefully for more of their releases in the future.

In 2020 it was revealed developer IO Interactive was working on a James Bond game known as Project 007 which, understandably, shook the video game world. Still in production, there’s a possibility that their James Bond game could be the … END_OF_DOCUMENT_TOKEN_TO_BE_REPLACED

The history of gaming isn’t that old compared to other artistic and entertainment mediums. Many people have lived through the entirety of video game history, and more people have seen most of it. As such, you’d think that the … END_OF_DOCUMENT_TOKEN_TO_BE_REPLACED

30+ years on, there’s somehow nothing quite like an NES action game. From the soundtracks to the level design and airtight mechanics, classic NES games like Ninja Gaiden and Mega Man remain some of the absolute best the medium … END_OF_DOCUMENT_TOKEN_TO_BE_REPLACED

Do so, and you’ll probably find that T END_OF_DOCUMENT_TOKEN_TO_BE_REPLACED

I remember when I played my first Resident Evil. It was a gift and couldn’t wait to get it running in my old PS1. That old Capcom “this game contains scenes of explicit violence and gore” plastered on the … END_OF_DOCUMENT_TOKEN_TO_BE_REPLACED

At the beginning of one mission, you are marked for dead by the organization you work for. Your handler has no idea what happened but informs you that they are coming for … END_OF_DOCUMENT_TOKEN_TO_BE_REPLACED

The history of gaming isn’t that old compared to other artistic and entertainment mediums. Many people have lived through the entirety of video game history, and more people have seen most of it. As such, you’d think that the … END_OF_DOCUMENT_TOKEN_TO_BE_REPLACED

(Updated 4/18/22) Even at a time when it feels like every game is being adapted into a show or movie, the news that Twisted Metal is being turned into a TV series stands out. Why? Well, it probably has … END_OF_DOCUMENT_TOKEN_TO_BE_REPLACED

(Updated 4/15/22) The reveal of the Mortal Kombat movie trailer and news that Street Fighter characters are joining the Fortnite roster has both legendary franchises on the minds of gamers everywhere. So, it’s only natural that fans have also … END_OF_DOCUMENT_TOKEN_TO_BE_REPLACED

While Super Smash Brothers for the Wii U and 3DS has been out for just over a year and the recent announcement of Cloud joining the roster garnering a massive amount of hype, many fans of the fighting game … END_OF_DOCUMENT_TOKEN_TO_BE_REPLACED

I’ll admit that I’ve never been a fan of visual novels. I have nothing against them; it just isn’t a genre I’m interested in. That said, MangaGamer’s announcement a while back that their upcoming Steam release of Kindred Spirits … END_OF_DOCUMENT_TOKEN_TO_BE_REPLACED

Black Shell Media is a multimedia marketing and PR studio specializing in distribution and publishing of indie games! We do a lot of marketing and work with websites, … END_OF_DOCUMENT_TOKEN_TO_BE_REPLACED

The month of October is here, and the spooky festivities are starting. However, it is still key to be aware of the other important events happening around this time of the year. For example, October is Breast Cancer Awareness month. … END_OF_DOCUMENT_TOKEN_TO_BE_REPLACED