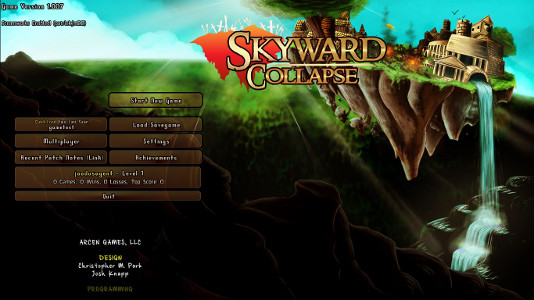 Arcen Games, the creators of A Valley Without Wind and Shattered Haven have recently released a new god game titled Skyward Collapse. As the Creator you get to build up your two civilizations of the imaginary continent Lumineth in the omniscient role while facing the challenges of large-scale cohabitation. This game stays true to the features that have become popular in the genre while at the same time adding some substantial twists to the formula. The key to succeeding in this game is maintaining balance and your victory hinges on keeping both sides alive and intact. 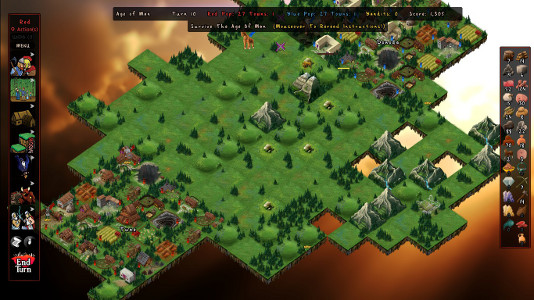 After a brief graphic-novel style introduction about the player’s role as the Creator and the societies that you will be developing, I jumped right into the tutorial phase. The tutorial worked nicely to explain a few complex mechanics without being too wordy or dry, which is a feat that many games try but do not accomplish. The basic gist of the game is to properly use each turn to develop your two “rival” cities in ways we are all familiar with for this genre. Pig farms, sheep pens, and bakeries must be built for food resources while also placing areas for carpenters, blacksmiths, ranches, and even fletchers around your town center to keep your people fed and safe. Just the amount of different buildings, military structures, and landscaping options make this an incredibly in-depth experience for five dollars. 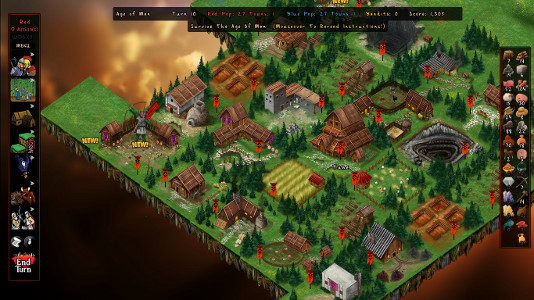 For each turn that takes place in the game the various military structures will begin creating soldiers that automatically go to attack the other city. Other units are available after certain requirements are met like elves, trolls, giants, and even a trojan horse; Greek and Norse mythology play an active role in the development of your two different cultures. The challenge in this game is to continue building up your two cities and instead of gathering your forces to crush the opposition you must play both sides and keep them from destroying one another. It’s a different twist on a well-established game mechanic and once I got used to it the strategy to win began to reveal itself. A basic disaster system known as “woes” will plague each of your cities as you progress forward; floods, violent crimes, and striking guilds will all weaken the current state of your cities as you attempt to keep them together and not fall prey to the other civilization’s tools of war. Victory conditions boil down to making sure one side is never more powerful than the other and it is a satisfying experience for $4.99. Skyward Collapse is available on Steam or from Arcen Games website.

In 2020 it was revealed developer IO Interactive was working on a James Bond game known as Project 007 which, understandably, shook the video game world. Still in production, there’s a possibility that their James Bond game could be the … END_OF_DOCUMENT_TOKEN_TO_BE_REPLACED

The history of gaming isn’t that old compared to other artistic and entertainment mediums. Many people have lived through the entirety of video game history, and more people have seen most of it. As such, you’d think that the … END_OF_DOCUMENT_TOKEN_TO_BE_REPLACED

30+ years on, there’s somehow nothing quite like an NES action game. From the soundtracks to the level design and airtight mechanics, classic NES games like Ninja Gaiden and Mega Man remain some of the absolute best the medium … END_OF_DOCUMENT_TOKEN_TO_BE_REPLACED

Do so, and you’ll probably find that T END_OF_DOCUMENT_TOKEN_TO_BE_REPLACED

I remember when I played my first Resident Evil. It was a gift and couldn’t wait to get it running in my old PS1. That old Capcom “this game contains scenes of explicit violence and gore” plastered on the … END_OF_DOCUMENT_TOKEN_TO_BE_REPLACED

At the beginning of one mission, you are marked for dead by the organization you work for. Your handler has no idea what happened but informs you that they are coming for … END_OF_DOCUMENT_TOKEN_TO_BE_REPLACED

The history of gaming isn’t that old compared to other artistic and entertainment mediums. Many people have lived through the entirety of video game history, and more people have seen most of it. As such, you’d think that the … END_OF_DOCUMENT_TOKEN_TO_BE_REPLACED

(Updated 4/18/22) Even at a time when it feels like every game is being adapted into a show or movie, the news that Twisted Metal is being turned into a TV series stands out. Why? Well, it probably has … END_OF_DOCUMENT_TOKEN_TO_BE_REPLACED

(Updated 4/15/22) The reveal of the Mortal Kombat movie trailer and news that Street Fighter characters are joining the Fortnite roster has both legendary franchises on the minds of gamers everywhere. So, it’s only natural that fans have also … END_OF_DOCUMENT_TOKEN_TO_BE_REPLACED

While Super Smash Brothers for the Wii U and 3DS has been out for just over a year and the recent announcement of Cloud joining the roster garnering a massive amount of hype, many fans of the fighting game … END_OF_DOCUMENT_TOKEN_TO_BE_REPLACED

I’ll admit that I’ve never been a fan of visual novels. I have nothing against them; it just isn’t a genre I’m interested in. That said, MangaGamer’s announcement a while back that their upcoming Steam release of Kindred Spirits … END_OF_DOCUMENT_TOKEN_TO_BE_REPLACED

Black Shell Media is a multimedia marketing and PR studio specializing in distribution and publishing of indie games! We do a lot of marketing and work with websites, … END_OF_DOCUMENT_TOKEN_TO_BE_REPLACED

The month of October is here, and the spooky festivities are starting. However, it is still key to be aware of the other important events happening around this time of the year. For example, October is Breast Cancer Awareness month. … END_OF_DOCUMENT_TOKEN_TO_BE_REPLACED