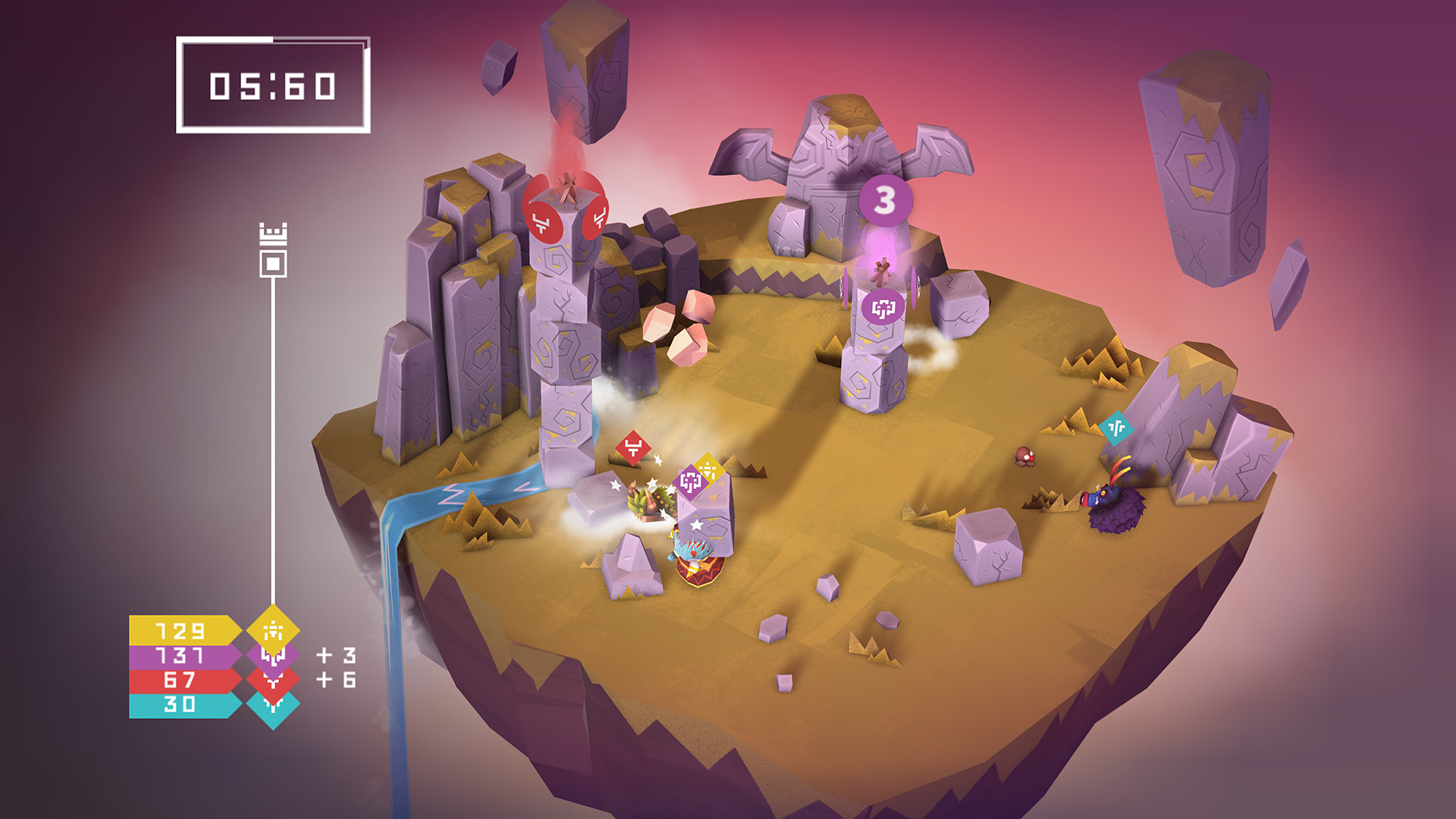 I’m back with another batch of recent indie releases that may have slipped past your radar. As always, I don’t guarantee that these games are good, just that they stood out amongst Steam’s usual tidal wave of weekly releases. Be sure to read user reviews for more information about each title.

Let’s start with Splasher, a challenging 2D platformer made by some of the developers behind the pair of Rayman games from a few years ago. The Inkorp company has been taken over by a maniacal dictator, and it’s up to you to use the prototype splatter cannon to end his reign of terror. The cannon is loaded with several types of liquid that you can spray on the environment to alter its properties, such as sticky ink, bouncy ink, etc. Splasher is currently only on PC and Mac, but it will be making its way to consoles later this spring.

Giga Wrecker is a 2D puzzle-platformer developed by Game Freak. Yes, Game Freak does occasionally make cool games that aren’t related to Pokemon. You play as Reika, a girl with the ability to manipulate random bits of debris. This comes in the form of using rubble to solve puzzles and create platforms, as well as weaponizing garbage to fight against an invasion of evil robots. The built-in level editor and community hub ensures that the game will keep you busy long after you finish the campaign.

As its name implies, Bleed 2 is the sequel to a criminally underrated action-platformer from 2012. Jump back into the shoes of Wryn on her quest to become the greatest hero of all time. In addition to your arsenal of conventional firearms, Wryn can also deflect bullets and momentarily slow time. Bleed 2 promises 7 levels, 25 boss fights, and 4 difficulty settings that alter enemy placement and attack patterns.

Arena is a stripped down, multiplayer-only version of Petroglyph’s three recent 8-Bit RTS games. This $5 title gives you full access to the multiplayer portion of the game, including all 30 maps, 6 factions, and community content. If you aren’t sure about jumping into the full version of Arena, then consider checking out the free demo version that is restricted to one playable faction per day.

LogicBots is a puzzle game where you design, build, and program robots to complete various logic puzzles. The game includes 40 levels, each of which have bonus objectives to complete. Some levels give you direct control of your robot, while others require you to program your robot to perform the level’s tasks on its own. LogicBots also includes a level editor and Steam Workshop support for additional replayability.

Ananias Roguelike is a traditional, turn-based roguelike that’s been around for a few years, but has just recently made its way onto Steam. Choose from 8 character classes and try to survive all 5 of the procedurally generated realms. The game can be linked to an online server to save your progress or share your high scores with other players. Ananias Roguelike is available on Android as well.

Finally we come to Brut@l, a modern action roguelike with an aesthetic loosely inspired by classic ASCII games. Choose your hero and fight hordes of enemies to survive all 26 floors of a procedurally generated dungeon. You start with nothing more than a torch and a battered shield. Crafting in Brut@l includes weapons, potions, enchantments, and talismans, all based on recipes you’ll find as you venture deeper into the dungeon. You can also find Brut@l on PS4.

Not enough games? Check out these other titles that didn’t make it to the full article:

That’s all for now. I’ll be back soon with more overlooked new releases.

Snowfall is here and it is time to cheer! Sorry about that… As different video games pump out their holiday events, plenty get swept under the radar. If you are tired from playing the multiple FPS holiday events … END_OF_DOCUMENT_TOKEN_TO_BE_REPLACED

Welcome ghouls, beasts, tricksters, and every horrific being known to man. The spooky season is upon us and I figured I would indulge in the festivities in my own way. Thus, I have come up with a satirical take on … END_OF_DOCUMENT_TOKEN_TO_BE_REPLACED

Do so, and you’ll probably find that T END_OF_DOCUMENT_TOKEN_TO_BE_REPLACED

I remember when I played my first Resident Evil. It was a gift and couldn’t wait to get it running in my old PS1. That old Capcom “this game contains scenes of explicit violence and gore” plastered on the … END_OF_DOCUMENT_TOKEN_TO_BE_REPLACED

At the beginning of one mission, you are marked for dead by the organization you work for. Your handler has no idea what happened but informs you that they are coming for … END_OF_DOCUMENT_TOKEN_TO_BE_REPLACED

The history of gaming isn’t that old compared to other artistic and entertainment mediums. Many people have lived through the entirety of video game history, and more people have seen most of it. As such, you’d think that the … END_OF_DOCUMENT_TOKEN_TO_BE_REPLACED

(Updated 4/18/22) Even at a time when it feels like every game is being adapted into a show or movie, the news that Twisted Metal is being turned into a TV series stands out. Why? Well, it probably has … END_OF_DOCUMENT_TOKEN_TO_BE_REPLACED

(Updated 4/15/22) The reveal of the Mortal Kombat movie trailer and news that Street Fighter characters are joining the Fortnite roster has both legendary franchises on the minds of gamers everywhere. So, it’s only natural that fans have also … END_OF_DOCUMENT_TOKEN_TO_BE_REPLACED

While Super Smash Brothers for the Wii U and 3DS has been out for just over a year and the recent announcement of Cloud joining the roster garnering a massive amount of hype, many fans of the fighting game … END_OF_DOCUMENT_TOKEN_TO_BE_REPLACED

I’ll admit that I’ve never been a fan of visual novels. I have nothing against them; it just isn’t a genre I’m interested in. That said, MangaGamer’s announcement a while back that their upcoming Steam release of Kindred Spirits … END_OF_DOCUMENT_TOKEN_TO_BE_REPLACED

Black Shell Media is a multimedia marketing and PR studio specializing in distribution and publishing of indie games! We do a lot of marketing and work with websites, … END_OF_DOCUMENT_TOKEN_TO_BE_REPLACED

Snowfall is here and it is time to cheer! Sorry about that… As different video games pump out their holiday events, plenty get swept under the radar. If you are tired from playing the multiple FPS holiday events … END_OF_DOCUMENT_TOKEN_TO_BE_REPLACED

Amazon Prime members can get free games and free in-game content every month that last a certain amount of time. You can jump over to Amazon to sign-up for an account or navigate to the Prime Gaming section to see … END_OF_DOCUMENT_TOKEN_TO_BE_REPLACED