As more and more roguelike games are created today developers are forced to find unique avenues to keep the genre fresh and interesting. For Australian based studio Defiant Development that unique twist came in the form of meshing the conventions of a traditional roguelike with the mechanics of a trading card game (TCG) for their Kickstarted project Hand of Fate.

Players sit across from the mysterious Dealer at the end of the world and choose their fate in the form of creating a deck of cards that will determine the challenges, encounters, and equipment that may appear on their journey.

Funded through Kickstarter in December of 2013 with more than 1300 backers Defiant has since made the game available for early access on Steam. We sat down with Defiant’s Creative Director Morgan Jaffit to learn more about the game’s core concepts and find out what players can expect from the title down the line. 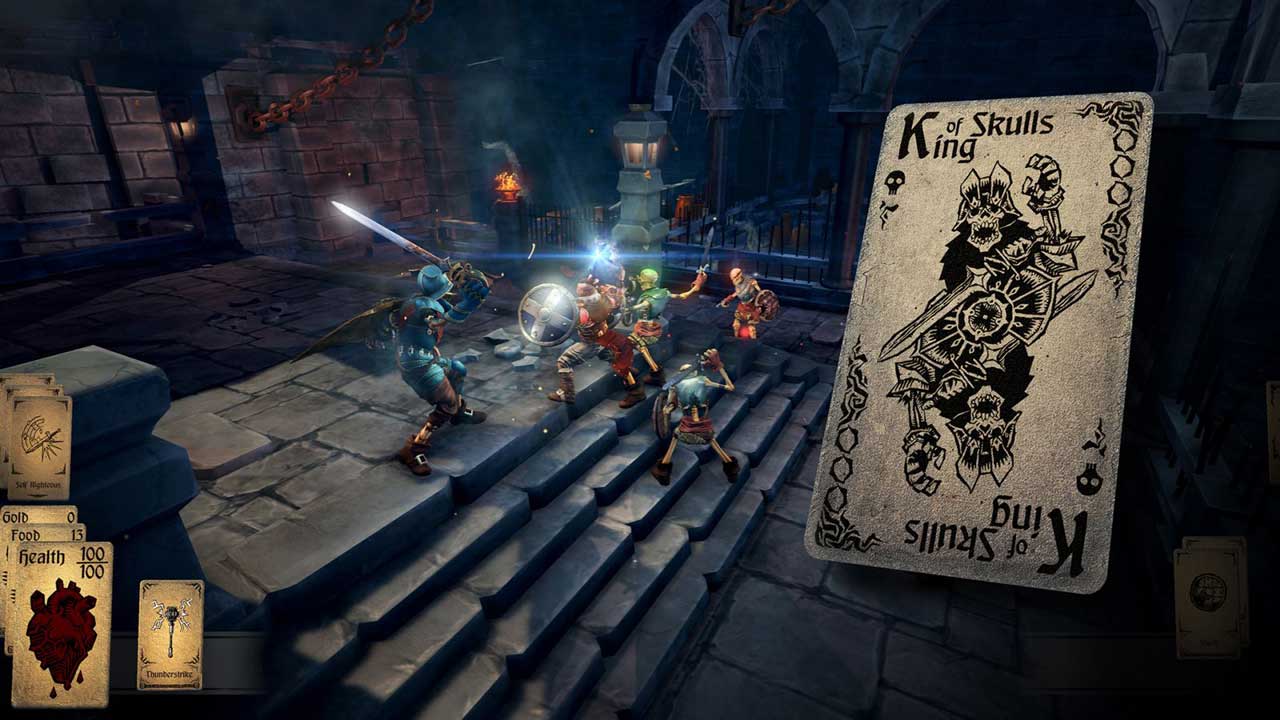 Jesse Tannous: What sort of storytelling aspects, if any, can players expect from this game?

Morgan Jaffit: You’re engaged in a life and death struggle with the Dealer. As you play the game, you learn some of the details as to how you got there, and why. We’ve worked really hard to make sure the Dealer on the other side of the table is a living, breathing character. He’s not there to tell you the story or explain how the game works, although he does a little of both, he’s there to represent the player across the table. He’ll provoke you, chat with you, and reveal a little of himself as he does so.

The game is ultimately not about a big story with twists and turns and dramatic plot revelations, it’s about providing a context and sense of atmosphere. So while there is narrative and storytelling through both the Dealer and the cards, at its heart the player will build their own story.

JT: How do players build their deck of cards? And how difficult are they to collect?

MJ: Each time the player defeats a Court Card, they’ll receive some additional cards to build their deck. So through the normal course of progression players will get stronger and gain access to new cards, weapons, and abilities. On the other hand, many cards have tokens (which means they’ll unlock a card if you defeat them) – so you need to encounter that card in game in order to win its token and gain a new card. Some of those tokens are easily found, some need special items and abilities, and some require a lot of work. As a result, completionists will have a lot of work to do in order to complete every possible token and find every possible card.

JT: Since this game does take some inspiration from TCG’s like Magic: The Gathering, are there any plans or ideas of adding a multiplayer element or competitive play?

MJ: Not for this one. We do have a single player score attack mode (Endless Mode) that allows players to compete for the highest score, but that’s as far as we intend to go. We’ve made a lot of decisions along the way that would preclude a really satisfying multiplayer mode, and we prefer to focus on doing one thing well. In the case of this game, that’s a strong, replayable single player game.

JT: How reliably will players be able to utilize their builds in the combat portions of the game? Will players run into situations where they draw no weapons or defensive gear going into a dungeon, similar to drawing no resource cards, like mana or energy, in traditional TCGs?

MJ: Pretty much exactly the same. Depending on which cards you’ve chosen for your deck you may find yourself short a weapon or ability at a critical time – each run depends on luck as well as skill to get you to the right place. 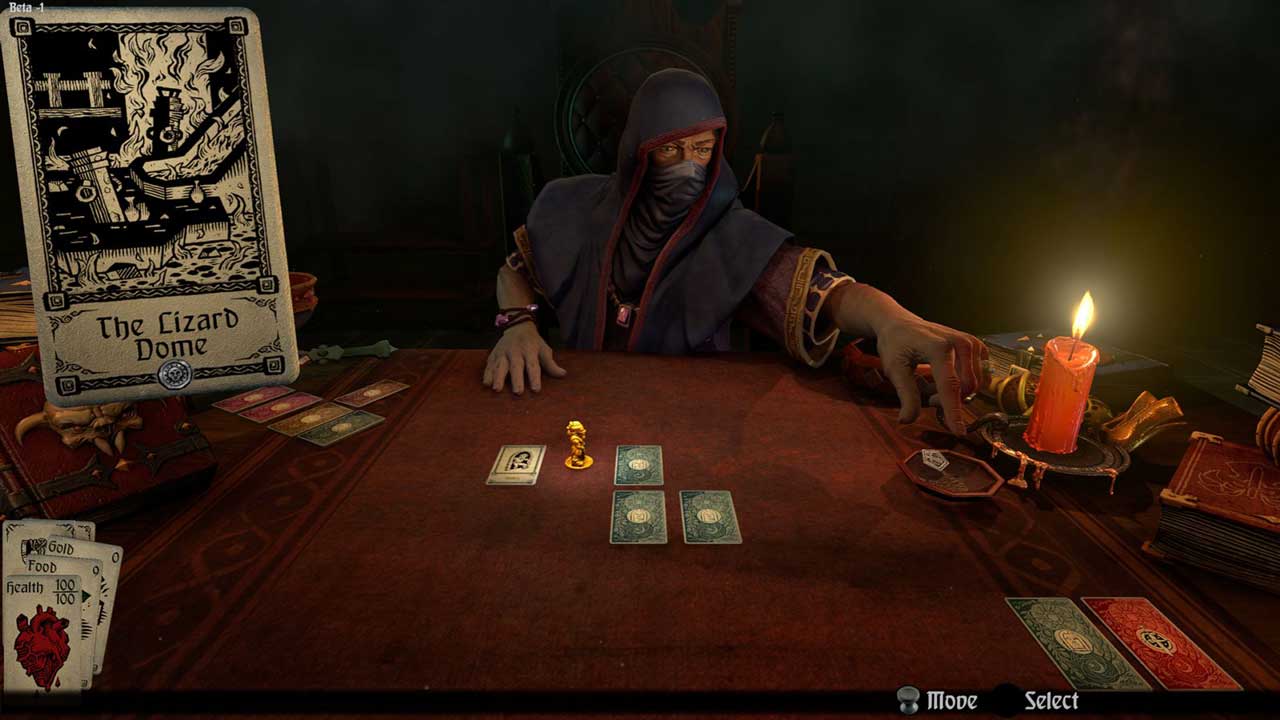 JT: What is going to keep the player engaged once they defeat all the members of the court the first time?

MJ: The game itself is rogue inspired, but it has much more progression than a traditional roguelike. That said, once you’ve defeated the Court you’ll still have tokens to unlock and Endless Mode score challenges to attempt. Even in early access we have multiple players with 50+ hours of play under their belt, so we’re pretty happy with the long term prospects.

Adding unique twists to the basic model of the roguelike might be the only way to keep the genre from going stagnant, and for many already playing the early access version of Hand of Fate it seems to be a welcome change.

Secrets of the Soundtrack with Darren Korb and Ashley Barrett

Snowfall is here and it is time to cheer! Sorry about that… As different video games pump out their holiday events, plenty get swept under the radar. If you are tired from playing the multiple FPS holiday events … END_OF_DOCUMENT_TOKEN_TO_BE_REPLACED

Welcome ghouls, beasts, tricksters, and every horrific being known to man. The spooky season is upon us and I figured I would indulge in the festivities in my own way. Thus, I have come up with a satirical take on … END_OF_DOCUMENT_TOKEN_TO_BE_REPLACED

Do so, and you’ll probably find that T END_OF_DOCUMENT_TOKEN_TO_BE_REPLACED

I remember when I played my first Resident Evil. It was a gift and couldn’t wait to get it running in my old PS1. That old Capcom “this game contains scenes of explicit violence and gore” plastered on the … END_OF_DOCUMENT_TOKEN_TO_BE_REPLACED

At the beginning of one mission, you are marked for dead by the organization you work for. Your handler has no idea what happened but informs you that they are coming for … END_OF_DOCUMENT_TOKEN_TO_BE_REPLACED

The history of gaming isn’t that old compared to other artistic and entertainment mediums. Many people have lived through the entirety of video game history, and more people have seen most of it. As such, you’d think that the … END_OF_DOCUMENT_TOKEN_TO_BE_REPLACED

(Updated 4/18/22) Even at a time when it feels like every game is being adapted into a show or movie, the news that Twisted Metal is being turned into a TV series stands out. Why? Well, it probably has … END_OF_DOCUMENT_TOKEN_TO_BE_REPLACED

(Updated 4/15/22) The reveal of the Mortal Kombat movie trailer and news that Street Fighter characters are joining the Fortnite roster has both legendary franchises on the minds of gamers everywhere. So, it’s only natural that fans have also … END_OF_DOCUMENT_TOKEN_TO_BE_REPLACED

While Super Smash Brothers for the Wii U and 3DS has been out for just over a year and the recent announcement of Cloud joining the roster garnering a massive amount of hype, many fans of the fighting game … END_OF_DOCUMENT_TOKEN_TO_BE_REPLACED

I’ll admit that I’ve never been a fan of visual novels. I have nothing against them; it just isn’t a genre I’m interested in. That said, MangaGamer’s announcement a while back that their upcoming Steam release of Kindred Spirits … END_OF_DOCUMENT_TOKEN_TO_BE_REPLACED

Black Shell Media is a multimedia marketing and PR studio specializing in distribution and publishing of indie games! We do a lot of marketing and work with websites, … END_OF_DOCUMENT_TOKEN_TO_BE_REPLACED

Snowfall is here and it is time to cheer! Sorry about that… As different video games pump out their holiday events, plenty get swept under the radar. If you are tired from playing the multiple FPS holiday events … END_OF_DOCUMENT_TOKEN_TO_BE_REPLACED

Amazon Prime members can get free games and free in-game content every month that last a certain amount of time. You can jump over to Amazon to sign-up for an account or navigate to the Prime Gaming section to see … END_OF_DOCUMENT_TOKEN_TO_BE_REPLACED